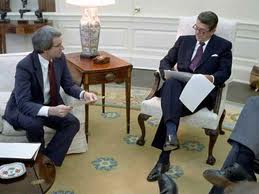 By Kevin Price, Publisher and Editor in Chief

Back in the early days of the “Reagan Revolution,” David Stockman was a GOP rock star.  The former Congressman from Michigan had a reputation as being a little odd, even by the standards of the legislative branch.  He was amazing with numbers and could be described as a “geek” when it came to fiscal policy and loved to show others that there was a better way.  He immediately caught the attention of Reagan and he was tapped as the Director of the Office of Management and Budget.  He found himself in trouble with the media as he proposed — among other things — designating ketchup as a vegetable for school lunches.

In his 1987 book, The Triumph of Politics (written after he left the Reagan administration), Stockman took his former boss — and the entire GOP — to task for failing to create a better and sounder fiscal environment.  It is actually a fascinating book and in spite of its angry tone, it takes everyone — Republican, Democrat — to task.  He remembers being pressured by conservative Senator Jesse Helms (R-NC) telling him that it is important to cut spending, but “do not think” that his precious tobacco subsidies should face the knife.  This attitude was pervasive with anyone who had an interest in spending, which was everyone in Congress.

Early on Stockman was a friend and ally to then Rep. Jack Kemp (R-NY).  Kemp was the genius behind the tax cut movement that propelled Reagan to office.  In his book, An American Renaissance, Kemp argued that the GOP had become a minority party because it spent its time trying to stop Democrat spending or by proposing more tax increases — both of which are very unpopular.  He argued instead that it was important to have an economy grow its way out of deficits.  This has become the perceived prevailing philosophy of Republicans according to critics, which certainly includes Stockman.

Stockman was seen prominently in the news this week as he has come out quite critical of the GOP and the White House’s approaches to spending:

CNBC.com: US is Not a “Triple-A Credit”: David Stockman.