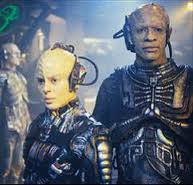 Like the "Borg" from Star Trek, when it comes to Salesforce.com, "resistance is futile." But for clearly different reasons.

Editor’s note: Kevin Price, Host of the Price of Business (on Salem affiliate and Bloomberg home in Houston, 1070 KNTH), and Publisher and Editor in Chief of the US Daily Review is covering Dreamforce 2011 for the second year in a row in San Francisco, California.  Dreamforce is sponsored by Salesforce.com, which is a leader in CRM and sales programs online. Each day he will be providing short posts covering highlights, low points, and interesting items that fall in between.

There is no question that Dreamforce‘s parent company, Salesforce.com, loves the San Francisco Bay area.  It is the home of so much innovation and technology and it is an awesome venue for people to come around the country to visit as they attend the event.  However, there is also no doubt that the Muscone Center is reaching its limits in terms of the number of participants it can handle.  At near exponential growth and with over 40,000 participants at this event, it is going to require a different home very soon.

Short of changing the venue the event has very few other options.  They could possibly break it down to several events based on various types of businesses that are represented at the event, or they could do it based on size (with ranges from small business to enterprise size firms), and several other different approaches, but this is plagued with numerous problems.  Salesforce.com is not in the expo business and if they do several events over many weeks it could become a significant preoccupation of the company.  Furthermore, one of the main goals of attending is networking and if they break it down into different sectors, the relationship development ability of the event will probably suffer.

I visited with a few small and mid level people with Salesforce.com who mentioned that leaving San Francisco is a possibility, but none of them wanted to be named in this piece nor were they specific about the future, so it is reduced to mere rumor at this point.  However, I will not be surprised if they change the location in the very near future.  If that happens, you will read about it here.

Salesforce.com is an amazing company.  It is absolutely massive with millions of users, but some how maintains a level of (at least perceived) nimbleness that you would only find with a much smaller firm.  Its unique platform makes it easy for it to change as needed and it even moves in certain directions based on the applications provided by its partners.  I have described Salesforce.com as more of an organism than a mere technology business.  This may sound a little creepy (one might think of the Borg on Star Trek).  You might remember this powerful species that is a blend of technology and biology that was so strong, that “resistance is futile” if they chose to attack.  There is a little of that in Salesforce.com, because they have quickly become the dominant player in its industry.  But unlike the Borg that overwhelms those they take over and then control, Salesforce.com adapts to the needs of its partners and customers and the reason the resistance is futile is simply because it makes the life of virtually all sales oriented business so much easier.  I have been reporting on businesses for two decades and have never seen a company like this and it seems poised for future growth in the years to come.

This was a great event for the second year in a row for me.  I appreciate the sponsorship of Baker Communications that led me to attend this event and appreciate the content they provided with special acknowledgement of Walter Rogers and Lin Fisher, the CEO and Chief Strategy Officer respectively.