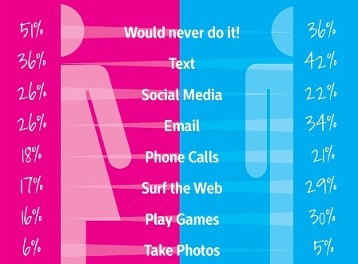 By Bradley Corporation, Special for  USDR

A national survey is revealing some dirty little bathroom secrets. The majority of Americans, despite their surroundings, admit they are comfortable using their cell phone while in a public or workplace restroom stall. Add to that the nearly 80 percent who say they frequently or occasionally see others leave a public restroom without washing their hands and the thought of runaway germs gets downright cringe  worthy.

“When you consider the fact that London scientists found one out of six cell phones have fecal matter on them it’s disconcerting to think about people using their phone in a restroom stall and then leaving without washing up,” says Jon Dommisse, director of global marketing and strategic development at Bradley  Corp.

According to the Healthy Hand Washing Survey, texting is the most common cell phone activity completed in a stall, followed by checking or sending email. Surprisingly, six percent of all Americans say they’ve taken a photo in the stall while eight percent of men admit they’ve checked their fantasy sports  league.

When researchers dug deeper into the reasons for not washing after using a public restroom, 18 percent of men confessed they skipped the suds because they didn’t feel the need. Another explanation given by both men and women for not washing up was a lack of resources – no soap or paper towels – or there was a problem with the  sink.

An additional finding of concern is that during seasonal virus outbreaks 40 percent of Americans don’t wash their hands more often after using public restrooms despite increased  germs.

“Clearly there’s work to be done to educate Americans about the spread of germs. Everyone should know that hand washing is the most effective way to avoid getting sick and transferring illness to others,” says  Dommisse.

Even though Americans don’t mind handling their cell phone while using a public restroom, they’re squeamish about touching other items. Almost 60 percent of survey respondents say they operate the toilet flusher with their foot to avoid coming in contact with germs. More than half use a paper towel to cover the door handle while others use their butt to open and close  doors.

The Healthy Hand Washing Survey queried 1,062 American adults online Dec. 10-13, 2015 about their hand washing habits in public restrooms and concerns about germs, colds and the flu. Participants were from around the country, were 18 years and older, and were fairly evenly split between men and women (47 and 53  percent).