Ringling Bros. and Barnum & Bailey invites families and businesses to join in ultimate shaving cream chaos on Tuesday, July 31, 6:00 p.m. as The Greatest Show On Earth teams up with two premier Texas clowning programs in a Guinness World Records attempt for the largest shaving cream pie fight ever held.  The event will take place outside American Airlines Center in AT&T Plaza.  The arena is located at 2500 Victory Avenue, Dallas, TX 75219.

The Biggest Shaving Cream Pie Fight On Earth is a celebratory event to kick-off International Clown Week and the Dallas/Fort Worth debut of Ringling Bros. and Barnum & Bailey presents FULLY CHARGED(SM).  According to Clowns of America International, August 1-7 is “International Clown Week,” which honors the charitable activities of clowns and clowning, as first proclaimed by the late Richard Nixon in 1971.  Ringling Bros. Clown Alley will pay tribute to Children’s Medical Center’s Funnyatrics therapeutic clown program and Lewisville Life and Fire Safety Clowns.  All three clowning teams will provide pie-ing tips and lead participants in the Biggest Shaving Cream Pie Fight On Earth with the hopes of shattering the current record.

The largest shaving cream pie fight is a new record category, and has a minimum requirement of 684 participants.  It is based on the old record for the largest custard pie fight, which has since been rested due to concerns about wasting food.  The largest custard pie fight record was held by Drake University, and was held at the Olmsted Student Center Parking lot inDes Moines, Iowa, on April 9, 2011.  At the July 31 event, a Guinness World Records adjudicator will be in attendance to declare whether or not the current world record has been defeated. 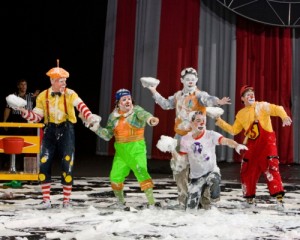 To participate in this pie-throwing extravaganza, participants must be at least 12-years-old and register in advance at www.RinglingPieFight.com.  In addition to participating in an once-in-a-lifetime opportunity, each registered participant will receive one each of a Certificate of Participation and souvenir premium item. The last day to register online is Tuesday, July 31 at Noon.  However, people may register in-person at the event.

To participate in the Ringling Bros. and Barnum & Bailey Biggest Shaving Cream Pie Fight On Earth, there is no required registration fee.  However, Ringling Bros. asks that you consider making a donation to help support the Funnyatrics Clown Program at Children’s Medical Center and Lewisville Life and Fire Safety Clowns programs. Both programs operate solely on donations by the general public and corporations. 100% of the monies donated will be divided between the two charities.  You may make a donation regardless of whether or not you participate in the event or not.

In addition to the pie fight, there will be a host of fun activities for Children Of All Ages including performances by the world famous Ringling Bros. Clown Alley, face painting, circus games, and more.

Participants may park at AudiPark, formerly known as Platinum Garage. It is located on North Houston and All-Star Way. Parking is free at AudiPark.