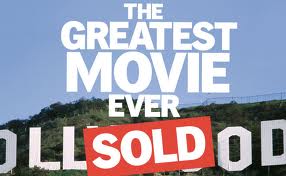 Writer, Director and (using the term loosely) actor, Morgan Spurlock became famous for his classic documentary, Super Size Me in which he ate exclusively at McDonald’s everyday for a month and saw his health rapidly deteriorate. It became a hit (by documentary standards) and was all the buzz among the mainstream media.  Some would argue that it has been a driver in the nanny-state proposals we have seen so much of over the last few years.

Morgan Spurlock is at it again in the recently released DVD entitled The Greatest Movie Ever Sold.  The movie explains the “secret sauce” of successful movies and TV programs – product placement.  Most people are familiar with product placement without much explanation.  Virtually everyone has seen movies with a Dr. Pepper truck driving by the star, the hero on an Apple computer, or the show’s host drinking Starbuck’s coffee.  It has been around for decades but has become crucial to a show’s success in recent years.

This is not only because of the dollars companies are willing to pay, but the power of cross promotion.  Happy Meals at McDonalds will often have a toy inspired by a movie they have its product placed in.  This approach can be applied to virtually any product or film.  Therefore, not only does such an approach create revenues for the movie, it will also create synergy.

The film is actually quite entertaining and appears to be in demand.  Like millions of other film viewers, I often pick up movies at the local “Redbox” and this one was really hard to find. I realize my experience is anecdotal, but every movie dispenser I went to had the image on their advertising wall… but of many locations, I was only able to find one.

The movie is about what it is like to develop a film about product placement.  It has Spurlock going from location to location trying to get sponsors in order to get the dollars necessary for the film to be a success.  Spurlock is clearly a consumer advocate; this was seen in his first major hit, Super Size Me in which he warns audience – in a way no health nanny could ever accomplish – of the horrors of fast food.  Spurlock continues to worry about his audience’s wellbeing in his new movie, but he is smart enough to not bite the hands (sponsors) that feed him.  There is a clear separation between the times he’s pitching the idea of the various brands being a part of the show and those times where he is taking advertisers to task.

When he does critique the industry he does it with gusto, showing how product placement actually affects our brain under a MRI, he seeks out the opinions of an angry public that is exhausted from such imaging, and he talks to industry leaders who admit they know that such techniques are effective in changing opinions and certainly want to keep it that way.

In the end, Spurlock creates a film that provides food for thought and is surprisingly entertaining in spite of its educational (or even political) objective.  The modern documentary seems to be increasingly demonstrating the idea of “infotainment” – shows that are both funny and informative.  It is certainly worth a view, as long as you can handle the onslaught of commercialism.  After all, a guy has to do what he must do to provide The Greatest Movie Ever Sold.