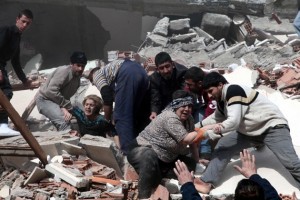 VAN, Turkey (Reuters) – As many as 1,000 people were feared killed on Sunday when a powerful earthquake hit southeast Turkey, flattening buildings and leaving survivors crying for help from under the rubble.

As night fell, survivors and emergency workers battled to pull people out of the debris in the city of Van and town of Ercis, where a student dormitory collapsed.

Residents in Van joined in a frantic search, using hands and shovels and working under floodlights and flashlights, hearing voices of people buried alive calling from under mounds of shattered concrete in pitch darkness and bitter cold.

An official at the Van provincial crisis center told Reuters more than 100 people had been confirmed killed so far and hundreds more were missing under destroyed buildings.

More accounts of dead bodies and destruction were emerging from smaller settlements across the remote area near the Iranian border, most of them left without electricity or phone access.

“The death toll is rising. Rescue teams are taking out dead bodies all the time,” Reuters photographer Osman Orsal said in Ercis, a town of 100,000 some 100 km (60 miles) north of Van where a student dormitory collapsed.

In Van, an ancient city on a lake ringed by snow-capped mountains and with a population of 1 million, cranes were used to shift the rubble of a crumpled six-storey apartment block where bystanders reckoned there were around 70 people trapped.

“We heard cries and groaning from underneath the debris, we are waiting for the rescue teams…(read more)