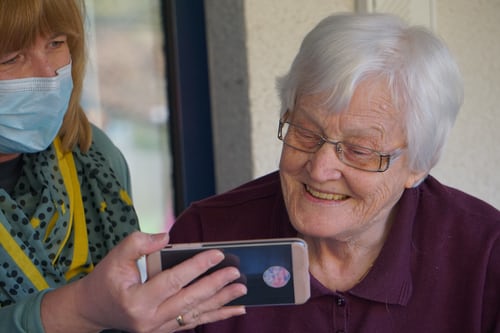 In the wake of recent FDA approval of a vaccine and with the first batches of COVID-19 vaccines ready to be deployed, one of the nation’s most prioritized groups – nursing homes and front-line healthcare workers – won’t likely receive them as quickly as desired.

High-risk populations such as the elderly and those tasked with caring for them are being promised priority access to the vaccine, thanks to guarantees from the federal government. In addition, the government is collaborating with popular national pharmacies such as Walgreens and CVS in order to more rapidly distribute these vaccines to those in need.

Yet even with a framework for distribution in place, the logistical challenges awaiting the process remain daunting.

First is the sheer size of the at-risk population. Roughly 25 million Americans either work in the healthcare sector or are full-time residents of nursing homes. Of this group, roughly 3 million are long-term care facility residents.

Additionally, there is no guarantee of a uniform distribution model. States are being left in charge of who receives the vaccinations first. While every state has signed up to receive deliveries of vaccines in the first wave of 3 million doses – and virtually all have promised nursing home residents and/or healthcare workers priority access to them – the logistical hurdles of deploying them across 50 different states is worrying to some advocacy groups.

New York, for instance, is ensuring its first batch of doses will be given to nursing home patients and employees who work inside them. Contrast this with Utah, which will send its doses to a variety of large hospitals in the state first (nursing home staff and patients will only receive vaccinations after).

Given that approximately 8% of all COVID cases and 40% of COVID-related deaths in the United States are directly or indirectly linked to nursing home facilities, the range in plans for deploying the first doses of Pfizer’s vaccine is worrisome to many.

Another concern in the near future is the critical lack of capacity in hospitals and healthcare-related facilities. With a shortage of nurses, select equipment and ICU beds in many states, even with a mass vaccine deployment imminent, those in need of the vaccines the most (nurses and the elderly) may not receive them in time to avoid infection. This can create additional strain on the healthcare sector due to a shortage of nurses and beds. Thankfully, nurse shortages are being addressed by Online ABSN Programs, which allow people to get started in nursing sooner than before.

The Centers for Disease Control is expected to issue a national recommendation that long-term care facility staff and residents be vaccinated first, but states will still ultimately have the say in how their vaccines are deployed initially.

Ultimately, advocates of the vaccine believe that efficient and widespread deployment of a coronavirus vaccine will be in full swing by early next year. Nevertheless, the challenges faced by the elderly and those who care for them right now is still a major hurdle in tackling some of the biggest hot-spots of transmission.