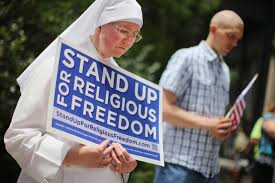 The following letter to congressional leaders responds to the Supreme Court’s decision today on Hobby Lobby and the HHS mandate:

RE: Protecting the Religious Freedom Restoration Act of 1993

We are leaders of diverse faith communities representing over 100 million Americans. Our faith communities worship in many different ways, and we have different views on many things. But in the wake of the U.S. Supreme Court’s decisions in favor of Hobby Lobby Stores and Conestoga Wood Specialties (Burwell v. Hobby Lobby Stores), we are united in our staunch support for maintaining all of the existing provisions and protections of the federal Religious Freedom Restoration Act of 1993 (RFRA). RFRA is a highly flexible legal standard that protects the rights and liberties of individuals of all religious faiths, including the most vulnerable.

The Supreme Court affirmed that all Americans—including family business owners—should be free to live and work according to their faith and receive the protections afforded by the Religious Freedom Restoration Act. When President Clinton signed RFRA into law over twenty years ago, he finalized the work of overwhelming bipartisan majorities in the United States House and Senate. Only three Members of Congress voted against RFRA. Not one of Congress’s 535 Members suggested that this landmark new law would not protect a person’s free exercise of religion if she chose to provide for herself, her family, and her employees by starting a business.

In the United States, freedom of religion has always included—and should always include—the right to live out one’s religion and act according to one’s conscience outside the walls of one’s house of worship. Every single day, millions of Americans are motivated by their faith to go and serve the neediest among us. The good works of these individuals of faith can be seen in soup kitchens, hospitals, schools, hospices—and, yes, family-owned businesses.

For over two decades, RFRA has protected Americans of all faiths from government coercion. Jews, Muslims, Hindus, Christians, Buddhists, Sikhs, and others all benefit when powerful government officials know that, as President Bill Clinton stated when he signed RFRA, government must meet “a very high level of proof before it interferes with someone’s free exercise of religion.”

We have come together to write this letter with one specific plea: Do not amend or repeal RFRA, one of our nation’s most vital legal protections for the religious freedom and rights of conscience of every person of every faith.

Changing RFRA because some disagree with one particular application of the law would set a dark precedent by undermining the fundamental principle of religious freedom for all, even for those whose religious beliefs may be unpopular at the moment. Congress has never passed legislation with the specific purpose of reducing Americans’ religious freedom. It should not consider doing so now.

Freedom of religion, like freedom of speech, must stand for all Americans, for all time.

Dr. L. Roy Taylor
Stated Clerk of the General Assembly of the
Presbyterian Church in America