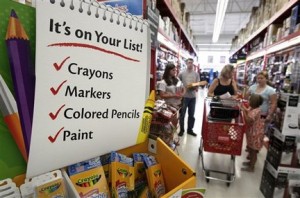 Consumers are giving the U.S. economy better grades this back-to-school season, but continue to hold tight to their purse strings and will rely heavily on online and mobile channels while they shop, according to Deloitte’s annual “Back-to-School” and “Back-to-College” surveys, released today.

Shoppers are far more optimistic about the economy than this time last year. Nearly four in 10 (37 percent) are more confident in the economy’s prospects, compared with just one-quarter (26 percent) a year ago.  Less than one-third (31 percent) believe the economy is in a recession, down from nearly half (48 percent) in 2012.

“Steady improvements in housing and employment, the stock market and personal finances give consumers reason to feel like they are back on solid ground,” said Alison Paul, vice chairman, Deloitte LLP and retail & distribution sector leader.  “However, after several back-to-school seasons of spending frugally and taking advantage of season-long discounts, shoppers may need more encouragement and excitement to expand their child’s wardrobe or replenish additional items.  Retailers will not only have to make offers very attractive this season, but they will have to score an ‘A+’ on unique, exclusive merchandise and services that nobody else can offer.”

Households’ concerns about higher food and energy prices and the job market continued to decline, however 54 percent flagged concerns about higher medical costs, up 8 percentage points from 2012.  Similarly, 53 percent cited higher taxes as a concern that could affect their back-to-school spending.

In response to these concerns, consumers may stick to necessities.  The number of parents with children in grades K-12 who said they would buy only what the family needs (57 percent) increased 5 percentage points, and those who plan to reuse last year’s items jumped from 20 percent in 2012 to 35 percent in 2013.

Consumers spending more may be doing so out of necessity rather than a desire to splurge this year.  Among consumers who expect their spending to increase (34 percent), the primary reasons are: prices are generally higher (57 percent), children need more expensive items (42 percent), and school budget cuts mean parents have to pay for more items (25 percent).  More than two-thirds (68 percent) of parents of children in grades K-12 even said they would forego purchases for themselves to pay for back-to-school.

More than ever, shoppers surveyed are going online and turning to their smartphones to make the most of their back-to-school budgets.

Among top shopping destinations, 36 percent of consumers plan to shop online this year, moving the Internet to the No.3 destination behind discount and office supply/technology stores, a significant jump from the No. 8 position last year.

The Internet also shot up on consumers’ list of sources for information about back-to-school items, trumping all other sources and knocking television out of the No.1 spot.  More than half (55 percent) of parents expect to head online, up 22 percentage points from last year, far outpacing the other top influencers including family (42 percent), friends (41 percent) and television (38 percent).

“Online and mobile channels are the season-winning plays for retailers this year,” continued Paul.  “If retailers get in front of the consumer who is checking prices, product details or product reviews, they become part of the experience rather than disappearing into the clutter of back-to-school advertising.  We expect to see strategic retailers do more than offer promotions through digital channels, taking the extra step to tie their efforts to popular school activities or social issues, or serve as a shopping companion or stylist.”

Competitive pricing remains the top mobile incentive.  Two-thirds (66 percent) of shoppers plan to use their smartphones to obtain price information, while 60 percent plan to do so to obtain discounts, coupons or sale information – a 15 percentage point increase from 2012.

While the number of respondents relying on social media (21 percent) remains steady, the survey found a marked increase in their online activities.  More than eight in 10 (83 percent) of these consumers plan to use social media to find out about promotions, up from 70 percent last year.  The number of social media users seeking reviews and recommendations leaped from 39 percent in 2012 to 67 percent in 2013.

Families sending their children off to college anticipate an increase in back-to-college expenditures this year, according to Deloitte’s survey of parents with students in college.  More than four in 10 (43 percent) of these respondents expect to spend more this year, nine percentage points higher than those with children in grades K-12.

Respondents will keep a careful eye on how they spend those dollars, similar to those in the “Back-to-School” survey.  Almost seven in 10 (68 percent) will buy only absolute necessities and 64 percent plan to shop only in stores offering sales.  More than four in 10 (44 percent) will request in-store price matching this back-to-school season.

“Families with students in college often have longer shopping lists with bigger ticket items,” noted Paul.  “Those sales are highly-valuable to retailers, especially when they can encourage other household purchases and loyalty alongside the back-to-school trip.  Retailers should pay extra attention to making parents’ and students’ tasks simpler by offering online tools to view items and virtually design their rooms, or by making it easier to find and purchase items that match a school’s dorm specifications.”

Parents and students alike will largely head online seeking a combination of the best deals, selection and convenience. Nearly three-quarters (73 percent) of parents indicate they will buy more online this year to find the best product or price, and more than half (52 percent) prefer to buy from retailers offering online shopping with in-store pick up.

Nearly twice as many (42 percent) of households in Deloitte’s “Back-to-College” survey plan to use social media during the shopping process compared to parents of children in grades K-12 (21 percent).  Those who do so will primarily seek out reviews/recommendations (76 percent), promotions (67 percent) and browse products (61 percent).