Millions of Sherlock Holmes fans worldwide will take part in a week of celebration of the world’s most famous detective in the first annual Sherlock Holmes Week from 30th July – 5th August. Holmes has had a resurgence in the last two years with two major Hollywood motion pictures and the success of BBC Sherlock. The week is backed by the main societies and organisations in the world. http://www.sherlockholmesweek.com is the website where fans can register their local events and take part in competitions. 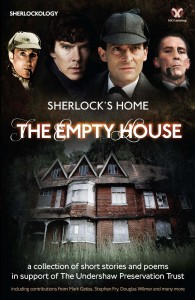 The motto of the week is “By the fans, for the fans,” and local groups are being encouraged to celebrate the week in their own way — from special screenings to picnics. Events have been confirmed across the USA, UK and as far afield as Thailand and Canada. The theme of this year’s week is to promote the Save Undershaw campaign — a trust striving to save the former home of the creator of Sherlock Holmes — Sir Arthur Conan Doyle (http://www.saveundershaw.com and http://www.facebook.com/saveundershaw). The campaign was recently captured in the book “Sherlock’s Home – The Empty House,” which featured contributions from Holmes legends Stephen Fry and Mark Gatiss.

There are two major competitions. The Sherlock Holmes Fashion Awards 2012 on 2nd August enables fans to design costumes for characters from the first two series of BBC Sherlock. The best three from each character will be selected by a leading blog that covers all manners of craft, including costume design (Crafty Crafty) and entered into Awards — with some very special judges and wonderful prizes. High quality entries will be submitted for coverage on Crafty Crafty and their sister site Dollymix.

Steampunk Holmes is the most eagerly awaited interactive book in history. Several years in the making, this Steampunk version of Sherlock Holmes will have a series of books in all formats, but most stunning on the iPad. This competition for Holmes fans gives them the chance to be a part of publishing history and have their artwork included in the first book:Steampunk Holmes – The Legacy of The Nautilus. Information on entering the competitions is on the website.

Supporters of the week include the top fan sites Sherlockology, The Baker Street Babes and I Hear of Sherlock. Special guest will be leading mentalist Joe Riggs aka The Real Sherlock Holmes.

The Great Sherlock Holmes Debate 3 will feature celebrities and experts from around the world coming together for the 3rd debate — the first two featured head-to-head clashes between BBC Sherlock and Warner Brothers Sherlock and included fans from more than 23 countries.

So who can get involved? Any Sherlock Holmes fan, wherever they are. The team have already been contacted by fans as far away as Japan and China. It seems that the popularity of Sherlock Holmes is truly global.