Editor’s note: After 2 years in an Iranian prison for being “spys,” two American hikers were finally released.  This is how that story was reported by CNN International:

American hikers Josh Fattal and Shane Bauer have taken off from Tehran and are on their way to Oman after being released from an Iranian prison Wednesday, a Swiss diplomat and their lawyer told CNN.

Livia Leu Agosti, the Swiss ambassador to Tehran, said the pair were bound for the Omani capital, Muscat.

Oman’s envoy to Tehran, Salem al Ismaily, earlier said in a statement the pair were in the custody of the Omani government and would spend a couple of days in Muscat “before heading home.”

The men’s families, as well as fellow hiker Sarah Shourd — who was arrested with them but freed last year on medical grounds — were waiting for them in Oman and were looking forward to their reunion. Shourd is now Bauer’s fiancee.

The two Americans were released on bail of $500,000 each and their sentences for spying convictions were commuted, Iran’s judiciary said, according to government-run Press TV.

The lawyer for Fattal and Bauer, Masoud Shafiee, told CNN the $1 million bail had been paid by the Omani government.

The pair arrived at Tehran’s Mehrabad International Airport late Wednesday, in a convoy of diplomatic cars with tinted windows which headed for a section of the airport normally used only by Iranian government officials.

The convoy had earlier left the country’s notorious Evin Prison through the front gates, accompanied by a police escort, but Bauer and Fattal were not visible.

Swiss and Omani officials had waited outside the prison to receive the Americans. Switzerland represents United States interests in Iran because there is no American embassy there, and Oman has acted as a broker between Washington and Tehran in the past.

The two men’s release comes a day before Iranian President Mahmoud Ahmadinejad is due to speak at the United Nations General Assembly in New York.

Asked at the United Nations about the news, Ahmadinejad’s chief of staff, Esfandiar Mashaei, said: “Yes, we were expecting their release, us and the president.”

High-profile American Muslims including boxing legend Muhammad Ali had called for their release, and a high-profile delegation of American Christian and Muslim religious leaders met Ahmadinejad in Iran last week to plead for their freedom.

“We were very happy to learn about their release today,” said Nihad Awad, national executive director of the Council on American Islamic Relations (CAIR), who was part of the religious delegation to Tehran.

“We are extremely happy for the hikers, their families and the country.”

Bauer and Fattal, both 29, were convicted last month of entering Iran illegally and spying for the United States, and each was sentenced to eight years in prison.

Their attorney, Shafiee, went into the prison earlier Wednesday with paperwork to show that bail had been paid for each of them. A judge had signed the bail papers that morning after several days of delays.

Fattal and Bauer were arrested along with Shourd in July 2009 after apparently straying over an unmarked border between Iraqi Kurdistan and Iran.

Bauer and Shourd told their families in May last year that they had gotten engaged in prison and planned to get married after their release. Fattal plans to be best man at the…(read more 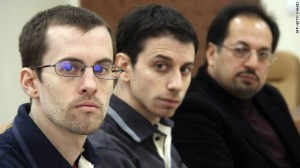