By Kimberly Morin, Contributor to US Daily Review. 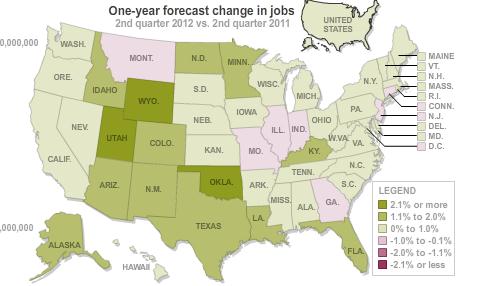 USA Today came out with a one year forecasted jobs growth graph that has some interesting results. According to the survey, the only states that are forecasted to grow jobs by 2% or more are Right-to-Work states – Wyoming, Utah and Oklahoma (Note: USA Today does not identify states in this way). The majority of states slated to see negative job growth are 7 to 1 Forced Union states, Georgia being the only exception as the sole Right-to-Work state.

There are 28 total forced union states in the United States and 22 Right-to-work states. How did the other states fare? You can see from the charts below: 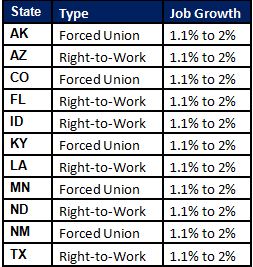 It has already statistically been proven that Right-to-Work states see higher growth in the private sector than Forced Union states. It should be a no brainer for the states that are trying to put Right-to-Work laws into place but they have come up with much resistance from the unions (naturally). If people would seek out the truth rather than listen to the union propaganda, they’d see that Right-to-Work is definitely the better option. One popular falsehood with Unions is to maintain that wages are lower in Right-to-Work states; however, it has been also proven that the “Cost of Living-Adjusted Earnings and Disposable Incomes Are Highest in Least-Unionized States”.

The national unemployment rate has been hovering around 9% for quite some time. At a time when jobs and the economy are front and center for most Americans, especially the millions of unemployed, it would behoove state governments to work towards setting an economic environment that promotes job creation and growth. Right-to-Work states have already proven throughout their history that they have the key to doing just that – freedom of choice regarding unions. It’s time to turn the economy around and gear it towards ALL workers, not just the less than 12% that are unionized as the Obama Administration has been doing.

Kimberly Morin is an AnyStreet Conservative Political Activist, she blogs for AnyStreet, Modern Conservative, writer for Examiner.com, contributor to Western Free Press and her personal political blog can be found at www.granitestateindy.com