By Bipartisan Policy Center, Special for US Daily Review. 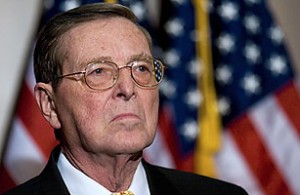 Former US Senator Pete Domenici speaks out on current Congress.

“The Domenici-Rivlin defined support proposal is a policy that will fundamentally reform Medicare,” he said, according to prepared remarks.  “And, this coming February, the Bipartisan Policy Center’s Debt Reduction Task Force will be hosting a major event on tax reform and the critical role it plays in restoring our fiscal health.”

“The framework for a grand bargain is already done.  There’s Domenici-Rivlin, Simpson-Bowles, and the Gang of Six—each saves somewhere around $4-5 trillion over the next decade and much, much more thereafter.  If you don’t like a policy from one, then you can grab a replacement from another…if you show me a plan, and your plan is missing Medicare and tax reform, then I’ll tell you, ‘you don’t have a plan.'”