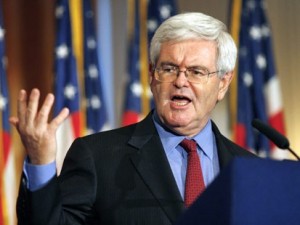 The Obama campaign earlier in the day released a video showing some of Gingrich’s most pointed criticisms of Romney.

Gingrich devoted much of his exit speech to thanking his supporters, whom he addressed Tuesday in a video previewing the official suspension of his campaign. A campaign spokesman announced last Wednesday that Gingrich would drop out this week.

Click to contact candidates or elected officials about this issue.Gingrich thanked former GOP presidential candidates Rick Perry and Herman Cain, who endorsed Gingrich after making their own departures from the race. He also tipped his hat to billionaire casino mogul Sheldon Adelson, “who single-handedly came pretty close to matching Romney’s super PAC.”

Adelson, along with his wife Miriam, donated $20 million to Winning…(read more)