Rising tuition costs and excessive borrowing have left many recent graduates struggling to afford the basic living necessities, according to findings from Accounting Principals’ latest Workonomix survey. Although Congress took action to stop student loan interest rates from rising, many recent grads are still grappling with high debt upon graduation. According to Accounting Principals’ survey a majority (68 percent) of recent graduates are leaving school with an average of nearly $40,000 of debt.  Most of this debt has been accrued through student loans ($27,029); however, recent graduates also leaned heavily on other debt – like credit cards – to get them through college, amassing an average of $12,742 of nonstudent loan debt upon graduating. 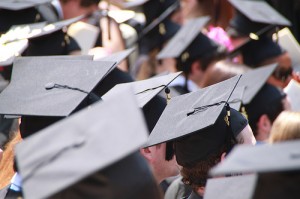 Regardless of who borrowed the most in college, recent graduates are finding it difficult to stay financially afloat after graduating. The survey found that 42 percent of recent graduates thought they would have more disposable income once they graduated. However, the reality of being a recent grad has proven to be more challenging – 83 percent of those surveyed cannot afford all of the basic living necessities including groceries, rent, cell phone, car, and student loan repayments.

“The most surprising finding in our Workonomix survey was the massive amount of debt these graduates had to take on to pursue a higher education,” said Jodi Chavez, senior vice president of Accounting Principals. “Entering the job market as a recent graduate is always stressful, but leaving school with this amount of debt puts added pressure on the newly employed.”

According to the survey, recent graduates would have been more proactive about their finances during college had they known more about the cost of living.  Approximately one-third of recent grads would have pursued more scholarships or financial aid options (35 percent), pursued a major that would have led to a higher paying job (31 percent), or gotten a job while in college and started saving earlier (31 percent).

However, despite their regrets graduates are being proactive about their finances– and would like to be able to turn to their employers for help.  More than two-thirds (68 percent) of those surveyed said their employer does not provide financial education courses, but nearly half (48 percent) would participate in them if offered.

“Employers are in a unique position to help entry level workers navigate the challenges of being a recent graduate.  They can offer inexpensive lunch-and-learn sessions that provide an overview of the basics of personal finance,” said Chavez.  “As a recent grad looking for employment, contact a recruiter who is willing to put in the time to coach you on your interviewing skills, help you improve your resume, and connect you with the right opportunities that will allow you to focus on the future and not the financial burden of your past.”