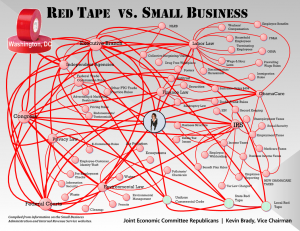 The U.S. House of Representatives today passed legislation to rein in Washington red tape, requiring federal agencies to be more open to the American people about its regulation plans, and closing loopholes that allow agencies to avoid analyzing the economic damage of proposed regulations.

The effort includes an amendment by U.S. Congressman Kevin Brady of Texas, chairman of the Joint Economic Committee, that forces federal agencies to disclose early to the public the goals of proposed new regulations and how they will measure their success in reaching them.

“Local businesses are suffocating in red tape and it’s hurting their job hiring. Citizens deserve to know – before red tape is imposed – just what Washington is trying to achieve with new regulations and how they’ll measure them. Everyone else is held accountable for their actions, why not Washington agencies?” asked Brady.

Brady notes that out of 3,708 new federal rules issued in 2012, only 14 had a full analysis done of their impact to the economy. Critics complain that often these same federal agencies later write the goals to match the results to avoid further criticism when a regulation falls short or harms the economy.

“Simply put, my amendment directs regulators to “tell us your objective, tell us how you’re going to measure it and then tell us you actually did what you promised’,” concluded Brady. “Let’s stop keeping the American public and local business in the dark.”