In the U.S., a burglary occurs every 14.6 seconds, according to the Washington Post. The average burglar spends about 12 minutes in the home and is usually male teenager who lives near your home. The typical home break in isn’t what most people think and it occurs far more often than anyone would like to think.

Summer is the ideal time for break-ins for many burglars. Many families travel, leaving their homes without thinking of the possibility of a burglary. But even when home, you may occasionally leave a door unlocked or a window open, not thinking that open entrances are an invitation to thieves. The FBI site states that 33 percent of burglaries in 2011 were non-forced entry, meaning the thief was able to walk right in. If you are planning to leave town for a while, there are some things you can do to burglar-proof your home:

An alarm system will notify the police if someone enters your home and doesn’t shut it off in time. There are more than 5,000 different alarm providers in the U.S., according to www.SecurityCompanies.com. Most break-ins happen during the day, according to the Post, so your alarm needs to be switched on any time you leave the house.

Alarm systems might not be enough, though. Thieves are able to work quickly and might be gone by the time the police arrive. An alarm system combined with a security camera might be more effective, according to KXAN Texas. The camera can catch the burglar’s face, which makes it easy to catch him. A thief might notice your security camera and decide not to rob your home. 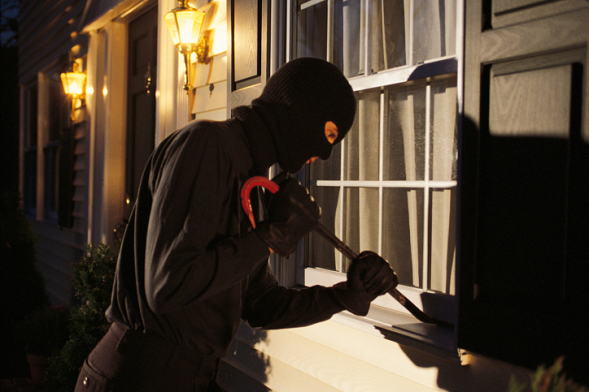 Before you leave for vacation, take a look at your landscaping. Trim away any branches that provide a thief with easy access to an upstairs window. Large bushes give a burglar a spot to hide. But, shrubbery with thorns can help deter thieves.

The tougher your door’s locks are to break or pick, the less likely a thief is to break into your home. Consumer Reports reporters tested several different types of door locks and found that high-security locks from brands such as Medeco withstood attempts at being drilled or picked. Adding a strike plate to your locks can also help prevent a thief from kicking in your door.

Make it Look as Though You’re Home

Burglars love it when no one seems to be home, stated on the Post. One way to deter a thief is to always make it look as though someone’s home. Put your lights and TV on a timer when you go on vacation, so they switch on and off each day. Install motion-sensor lights outside which switch on if someone approaches your home. Contact the post office and newspaper before you leave and put your mail and paper delivery on hold until you get home.

It’s tempting to share the news of your upcoming trip on Facebook or another social network. Doing so can put you at risk of a break-in, as a thief can look up your address using your name. Only tell close friends, your employer and family about your trip.

Don’t leave a ladder, shovel or any yard equipment lying in easy reach when you’re not using them. Lock your tools in a shed or garage, so a thief can’t use one to smash a window or climb up and enter your home through the second floor.

Working with your neighbors can also help you prevent break-ins. Reduce everyone’s chance of being burglared by teaming up with the people who live around you.