Introduction by Kevin Price, Publisher and Editor in Chief  of US Daily Review

My taste in music has had me as the subject of many jokes.  More than one friend of mine has described me as one who “must have grown up as a poor black child in Detroit.”  The Detroit part is true (actually in a suburb immediately North of it called Ferndale), modest middle class is a better description of the income bracket, and my skin color is off entirely.  However, I have always had a love of the Motown and Philadelphia sound.  It is not unusual for me to drive in my car with the sounds of the Temptations or Al Green being aired proudly.

Recently, while at a Barnes and Noble book store, I heard a very unique sound that caught my attention.  I really thought it may have been a Motown artist I somehow missed or someone from Philadelphis who was big decades ago, but I was not aware of.  I was wrong on both counts, it was Oakland, California born and raised, Raphael Saadiq delivering a sound that brings out the soul in all of us.  This is the fourth studio album of the artist and it was released earlier this year.  I have heard the entire CD and love every piece and am particularly impressed with his hit “Go to Hell” and my personal favorite is “Heart Attack.”  For many of the songs, Saadiq takes a retro approach by incorporating lush orchestration and strings as predominant elements.  It is clearly reminescent of works popular in the 1960s out of Detroit and Philadelphia.  Here is an excellent review that reflects with much greater eloquence the case for Saadiq’s album than I can provide and it was chosen in the hope that the reader chooses to purchase this important CD: 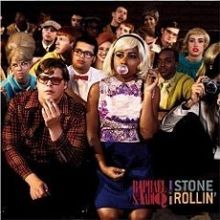 Stone Rollin will become a R and B Classic

On his fourth album, Oakland’s Raphael Saadiq continues along the dazzling path of retro soul he blazed on his fantastic 2008 release, The Way I See It. Saadiq’s infatuation with old school soul has been apparent since his days as a member of Tony Toni Tone, but this album’s delicious mix of fifties rock n roll, blues, seventies funk and sixties Motown soul is his most diverse love letter to the music he adores yet.

Saadiq’s willingness to deliver such an organic, lo-fi sound makes for a striking listen that is defiantly old school, largely shunning the lush production and crisp sound of his previous work in favor of the sparse clatter of horns, strings, guitar and background singers. The fuzzy haze works wonders on uplifting “Go To Hell”, as thumping drums and a mellow bass line rumble along a wash of horns and strings over Saadiq’s proclamation of love, while the loosely shaken riffs and cymbal happy beat of “Radio” sound fantastic as he looks to escape a pushy groupie.