The U.S. economy grew at a slower pace than expected in the first quarter, prompting fresh fears about the recovery’s sustainability. 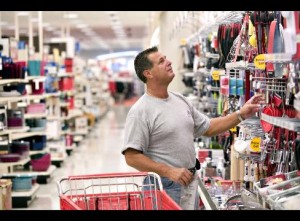 Gross domestic product, the value of all goods and services, rose 2.2% in the March period, down from 3% a quarter earlier, the Commerce Department said this morning. Economists had expected GDP growth of 2.5%. Meanwhile, consumer spending rose the most in more than a year.

“While the economy continued to grow in the first quarter, the expansion remains modest in pace and subpar from a historical perspective,” says Jim Baird, chief investment strategist at Plante Moran Financial Advisors. “The economy is still on an uncertain footing and a window of risk exists, given the global slowdown that is unquestionably underway and the recessionary environment now enveloping multiple developed economies.”

While the drop in GDP growth appears worrisome, economists say the first quarter’s growth was, in some ways, healthier than the greater expansion in the prior period. Consumer demand underpinned first-quarter GDP growth. But, in the fourth quarter, inventory building fueled expansion, as companies rushed to take advantage of an expiring tax credit.