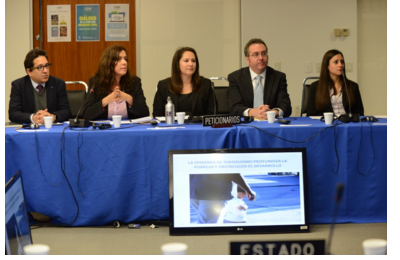 By ASH, Special for  USDR

The Inter-American Commission on Human Rights (IACHR) heardtestimony from experts yesterday on why tobacco should be considered a human rights issue. The thematic hearing, held at the Organization of American States (OAS), was the first time the Commission has formally considered tobacco in its work. Tobacco continues to be the number one cause of preventable death in the world, killing about 6 million people per year and causing incalculable disease and economic  costs.

Uruguayan Ambassador to the United States Carlos Gianelli Derois said at an Embassy event recognizing the Commission hearing, “We value the fact that the highest OAS body for human rights has decided to hold a special session on this issue as a gesture that reinforces what President Vázquez said during his speech at the United Nations General Assembly last year: ‘Public health is a key element of the sovereignty of our nations, a right of the people, a factor for the development of our societies and an unavoidable responsibility of the  State.’“

Expert witnesses from three groups – Action on Smoking and Health (ASH US), the InterAmerican Heart Foundation (FIC Argentina) and the O’Neill Institute at Georgetown University Law Center – argued that the failure of governments to curtail tobacco industry practices such as marketing to children and interfering in public health policy amounted to a violation of obligations under several human rights  treaties.

The solution, according to the panelists, is the full implementation of the World Health Organization Framework Convention on Tobacco Control (FCTC), a global treaty which has been joined by nearly every country in the Americas. The United States is one of the few  holdouts.

“Governments have an obligation to provide citizens with the highest attainable standard of health,” said Laurent Huber, executive director of Action on Smoking and Health. “Implementation of the Framework Convention on Tobacco Control is entirely attainable, it is extremely cost effective, and we know it  works.”

Panelists focused in particular on the corruptive practices of the tobacco industry in pushing cigarettes, which kill half of long term users, and advertising that is often aimed at women, young people, children and vulnerable groups. For example, one panelist shared a quote from a tobacco executive who stated “We don’t smoke that s***. We just sell it. We just reserve the right to smoke for the young, the poor, the black and the stupid.” – R.J. Reynolds Executive, Cited in, First Tuesday, ITV  1992.

The IACHR does not have the authority to oblige governments to enact tobacco control regulations, but it receives periodic human rights reports from its member governments, and can press to have tobacco issues included. The Commission can be instrumental in creating the political will necessary to advance human rights. The panel presented a number of recommendations on further action by the  Commission:

Following the joint presentation, the Commissioners responded and posed several thoughtful questions. Commissioner Esmeralda de Troitiño of Panama said that she was “impacted and struck” by the hearing. “To see the internal documents showing that they’ve [the tobacco industry] been lying and denying reality! The industry is overstepping their responsibility and going into corruption. That is the strong link that bonds the Commission and organizations to protect fundamental rights.”

Click here to view the presentation that was made and associated  photos.

ACTION ON SMOKING AND  HEALTH

Action on Smoking and Health (ASH) is the nation’s oldest anti-tobacco organization dedicated to health for all. ASH was formed in 1967 in response to the U.S. Surgeon General Report in order to use legal action to fight tobacco and protect nonsmokers. Today, because tobacco is the leading cause of preventable death worldwide, ASH uses global tools to counter the global tobacco epidemic. Learn more about our programs at  www.ash.org.

SOURCE Action on Smoking and  Health