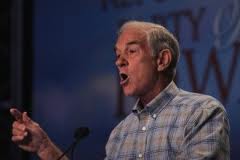 Editor’s note: Ron Paul is often at the center of attention and he certainly knows how to draw a crowd, raise dollars, and blow out polls.  However, in the end many doubt he can win his party’s nomination, let alone the White House.  Politico seems to be arguing in this recent column that in spite of what happens in the end, the Congressman pulls enough influence to receive serious headlines:

Ron Paul, despite his second-place showing in the Ames Straw Poll, is not receiving the same amount of news coverage as his GOP rivals, according to a study released Thursday by the Pew Research Center’s Project for Excellence in Journalism.

Looking at stories that have a primary focus on presidential candidates across prominent publications in Internet, print, broadcast and TV mediums, coverage of Paul has been surpassed by all potential 2012 pols other than Rick Santorum and Herman Cain (some longshot candidates, like Thaddeus McCotter, were not measured). The election newsmakers with more press than Paul include Sarah Palin (undecided on a 2012 run) and Donald Trump (not running…for now).

The Pew analysis rounded up hundreds of stories across 52 outlets and found President Barack Obama had 221 stories written about him from the beginning of the year through Aug. 14. Obama was followed by presumptive GOP frontrunner… (read more)