Editor’s Note: For years talk of reforming Social Security was dismissed as alarmist by most politicians, the mainstream media, and even the general public.  Politicians that attempted to navigate such waters were quickly dismissed or dismantled by either the media or their opponents (or, often, both).  This year, more Republicans are questioning the current Social Security system and are believing that some ownership on the part of the participants (by being able to choose where some of their investments go) is greatly needed.  However, with our largest population group — the Baby Boomers — in their retirement age; it will be interesting to see how such reforms are received.  This is how Fox News covered it recently: 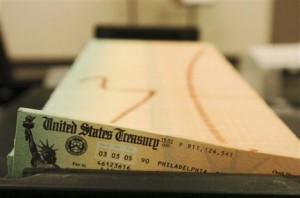 As President Obama sidesteps ways to keep the retirement system viable, his would-be rivals are eager to let younger workers divert part of their payroll taxes into some type of personal account to be invested separately from Social Security.

Former Massachusetts Gov. Mitt Romney has a version. Reps. Michele Bachmann of Minnesota and Ron Paul of Texas have said younger workers should be allowed to invest in alternative plans. Texas Gov. Rick Perry has raised the idea of letting whole groups, such as state and local government workers, opt out of Social Security.

These proposals are popular among conservatives who believe workers could get a better return from investing in publicly traded securities. But most in the Republican race have been careful to say they would fight to preserve traditional Social Security for current retirees and those approaching retirement. Younger workers, they say, should have more options.

Romney says the stock market collapse in 2008 shouldn’t scare workers away from investing in private accounts, but acknowledges it’s an issue.

“Given the volatility of investment values that we have just experienced, I would prefer that individual accounts were added to Social Security, not diverted from it, and that they were voluntary,” Romney wrote in his book, “No Apology.”

Any kind privatization, however, is sacrilegious for liberals and many moderates. They say it would drain resources from the more than 50 million people who now receive benefits. Social Security experts say raising the privatization issue could give Democrats a potent political weapon.

“Any Republican who pushes personal accounts too hard will ensure Obama’s re-election,” said Kent Smetters, a business and public policy professor at the University of Pennsylvania’s Wharton business school. “That’s bad news for the Social Security system because President Obama refuses to take a leadership position in dealing with the nation’s entitlement overspending.”

In 2005, Bush made a push to give workers the option to privately invest a portion of their payroll taxes to provide a supplement to government benefits. Republican lawmakers were reluctant to jump aboard as Democrats argued that Bush was trying to “end Social Security as we know it.”

Perry has helped make Social Security a leading issue in the campaign by writing in his book, “Fed Up!” that the program is a “Ponzi scheme” and a “failure.”

Perry boasts that his provocative language is forcing the candidates to talk about an important issue. “Other candidates in this race were content on continuing to sweep it under the rug and continuing the status quo,” Perry spokesman Mark Miner said.

Obama mostly has avoided the issue in the first three years of his presidency, arguing that Social Security has not been a major contributor to the nation’s fiscal problems. As a candidate in 2008, Obama proposed increasing payroll taxes on high-income workers to help shore up the system, but he hasn’t pushed the idea since taking office.

All the top Republican candidates have denounced tax increases.

Despite Perry’s rhetoric, he hasn’t released a comprehensive plan to address Social Security’s financial problems. Perry says personal accounts “ought to be on the table,” along with raising the retirement age.