24th March is the birthday of one of Britain’s finest scientists, 18th century self-made carpenter turned clockmaker John Harrison, whose epic 40-year struggle with the establishment to solve the “impossible” longitude problem is “one of the greatest success stories ever told” according to WimbledonWatches.com, which is participating in the celebration of this inventor.

Harrison’s remarkable story remains an inspiration today, not least to his descendant Lucy Parker, managing director of WimbledonWatches.com, online retailer of vintage watches. “John Harrison was a determined man. Against all odds, he rose from humble Yorkshire origins to become a successful scientist and engineer,” she said. “Even when nobody believed him, he never gave up. His inventions saved the lives of countless sailors.”

Born in 1693 to a working-class Yorkshire family, Harrison followed his father into carpentry, but soon began building clocks in his spare time, despite having little formal education. He was 37 years old when he embarked, in 1730, on the challenge that would make his name and fortune, but would take a lifetime to complete.

In the 18th century, ships were unable to determine how far west or east they had sailed from their home port. This led to frequent shipwrecks and loss of life. Determined to find a solution, in 1714, the British Government offered a £20,000 prize (worth about £2 million today) to the person who could invent an accurate way of finding longitude at sea.

The scientific community thought the task impossible. Eminent scientists including Sir Isaac Newton tried to solve it, but none managed it. They thought the answer lay in the “clockwork” of the heavens – astronomy. But Harrison believed there was a mechanical answer, if he could build a near-perfect timekeeper. By comparing the precise time on the boat with that in the ship’s home port, he knew it was possible to calculate the distance travelled.

Between 1730 and 1759, he produced a series of revolutionary timekeepers, H1, H2 and H3. These were large “sea clocks” with mechanisms that compensated for the motion of the sea. They were accurate, but not accurate enough. With characteristic determination, Harrison radically altered his design and produced H4, a portable device similar to a large pocket watch. It was a revelation. In 1764, after six weeks at sea, it was out by just five seconds – an unprecedented accuracy three times better than that required to win the Longitude Prize. 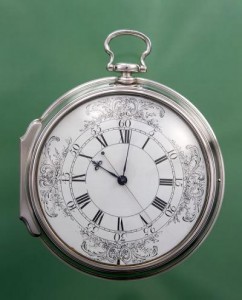 The problem was, nobody believed it. Astronomers on the Board of Longitude, which administered the prize, refused to accept that a mechanical timekeeper could be so accurate.  But Harrison fought on, enlisting the help of King George III himself. In the final decade of his life, Harrison finally received the financial reward and recognition he had struggled for, but the main Longitude Prize was stubbornly never awarded. Harrison died a wealthy and respected man on his 83rd birthday, 1776.

According to a company statement, “Lucy Parker can trace her family line back to the Harrison family via her grandmother Elsie Harrison and found herself drawn to the watch industry, setting up Wimbledon Watches. Wimbledon Watches is a vintage and pre-owned watch specialist which sells Swiss brands such as Rolex, Longines, Omega, Breitling and other watches from bygone eras from the 1920s through to the more modern day. Wimbledon Watches are passionate about watches and the craftsmanship involved in creating intricate watch movements that track time.”

Sponsor: With over 1,000 articles in 6 months, shouldn’t your company be on this growing website? Ask about our affordable advertising rates. info@usdailyreview.com