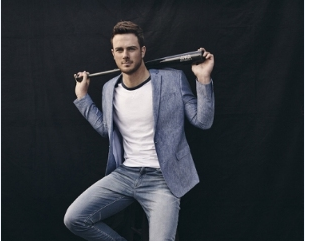 By EXPRESS, Inc., Special for  USDR

EXPRESS, Inc. (NYSE: EXPR) is pleased to announce that Major League Baseball All-Star Kris Bryant of the Chicago Cubs will serve as the next EXPRESS Men’s Brand Ambassador. Bryant joins the retailer’s roster of elite brand ambassadors and will appear in a new integrated marketing and advertising campaign across print, digital, social media and in-store platforms beginning March  2016.

During the 2015 season, Bryant established himself as one of the most sought after players in the game, capturing the National League Rookie of the Year award and leading the Chicago Cubs to play in their first National League Championship Series in 12  years.

“On and off the field, I am always ready for new, exciting opportunities,” said Bryant. “EXPRESS has consistently been my go-to brand– whether I’m suiting up for press conferences or relaxing in jeans on my off days. I am honored to join EXPRESS as Brand Ambassador and look forward to being part of a brand that is true to my personal style and inspires  fans.”

“EXPRESS’ ongoing mission is to engage our customers with exemplary role models,” said David Kornberg, EXPRESS President and CEO. “Kris is one of the world’s most talented athletes and with his confident style, hard work ethic and unrelenting determination, we know he is going to be a game-changer for baseball and EXPRESS  alike.”

EXPRESS’ debut campaign with Bryant will showcase the baseball star in apparel for all wearing occasions, from classic cotton sateen Photographer suits and Tech 1MX shirts for dressing up, to casual stretch denim and signature polos for every  day.

Customers can get in on behind-the-scenes action by following @ExpressRunway on Instagram, @ExpressLife on Twitter, @Express on Snapchat, Facebook.com/EXPRESS and at  http://www.express.com/men/kris-bryant.

About Kris  Bryant:
Kris Bryant is the reigning National League Rookie of the Year in Major League Baseball.  The 24-year-old hit .275 with 26 home runs and 99 RBI to earn an All-Star selection. The power-hitting right-hander clubbed the longest recorded home run on September 6 of the 2015 MLB season, a 495-foot home run, in a game against Arizona. Bryant, a Las Vegas native, had the best-selling jersey in baseball during 2015, according to the MLB.com  Shop.

About EXPRESS,  Inc.:
EXPRESS is a specialty apparel and accessories retailer of women’s and men’s merchandise, targeting the 20 to 30 year old customer. The Company has over 30 years of experience offering a distinct combination of fashion and quality for multiple lifestyle occasions at an attractive value, addressing fashion needs across work, casual, jeanswear, and going-out occasions. The Company currently operates more than 600 retail and factory outlet stores, located primarily in high-traffic shopping malls, lifestyle centers, and street locations across the United States, Canada, and Puerto Rico. EXPRESS merchandise is also available at franchise locations in the Middle East, Latin America, and South Africa. EXPRESS also markets and sells its products through its e-commerce website,www.express.com, as well as its mobile  app.