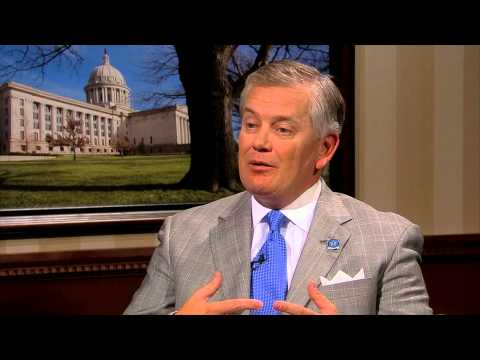 Oklahoma Insurance Commissioner John D. Doak, along with insurance regulators from 43 other states, went to Washington, D.C. Thursday to voice concerns about upcoming steps in the implementation of the Affordable Care Act (ACA) directly to President Barack Obama.

“Today we were collectively able to drive home the importance of state-based regulation,” said Doak. “I was able to speak to the President and express my gratitude for his quick response to the tornado outbreak we experienced in May. Even though we are far apart on health care policy and other issues, I respect the office very much. The President did say that if a state policy was working, he would allow that policy to continue, and Insure Oklahoma is a great example of a state program that serves Oklahomans well that we need to be able to continue.”

The meeting, attended by President Obama, Vice President Joe Biden and other senior staff members, focused on issues the administration needs to address to allow consumers, insurers and state regulators to prepare for the 2015 open enrollment period.

State regulators brought up numerous issues including rate increases in 2015, the need for improved back-end processes on the Exchange, federal standards that are not in the best interest of consumers and the ability of states to monitor navigators as they see fit.

“Some of the plans for 2015 are very troubling,” said Doak. “In the most recent proposed rules, they have listed several areas where navigator oversight laws would be preempted. That is an extreme overreach. States have the primary responsibility to protect consumers from fraud and misleading marketing tactics and we take that responsibility very seriously. For them to try and tie our hands in this way is ill-advised and absurd. Each individual state should have the power to decide what is best for its citizens.”

State regulators also expressed concern about the dwindling number of former state regulators in key positions at the Center for Consumer Information and Insurance Oversight (CCIIO).

“Very few of the decision makers at HHS and CCIIO have any experience with private insurance regulation. In Oklahoma, anyone seeking to become Insurance Commissioner is constitutionally required to be well versed in insurance. The federal leaders who impact insurance regulation policies should be held to the same standard.”

Insurance commissioners also inquired about their authority to set a broader open enrollment period in the name of added consumer protection.

“This open enrollment period was plagued with problems and continuously shifting deadlines,” said Doak. “Consumers who had enjoyed the always-available sales practices of health insurance were forced into a take-it-or-leave-it situation with financial penalties imposed on those who chose the option less favorable to the federal government. States should have the authority to control the timing and availability of health insurance products in their markets.”