By London 2012, Special for US Daily Review.

As always in the Olympic Games, the Athletics events are eagerly awaited and there is plenty of exciting action to look forward to in track and field.

Great Britain poster-girl Jessica Ennis starts her bid to win gold in the Heptathlon when she competes in two of her favoured events in the morning – the 100m hurdles and the high jump. 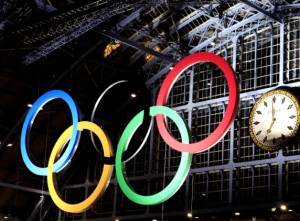 The Sheffield athlete, who will be making her Games debut after being ruled out of Beijing 2008 due to injury, will then compete in the shot put and the 200m in the evening.

The women’s 100m and 400m will also begin on Day 7, with Shelly-Ann Fraser-Pryce and Carmelita Jeter two of the favourites to land gold in the shorter of the sprints.

Sanya-Richards Ross of the USA has high hopes of claiming gold in the 400m, while Great Britain will look to Christine Ohuruogu to challenge for a medal.

Javier Culson of Puerto Rico and Great Britain’s world champion Dai Greene are two of the leading contenders in the 400m hurdles, which also gets under way on a day when gold medals will be won in the women’s 10,000m and the men’s shot put in the Olympic Stadium.

In the Track Cycling at the Velodrome, Great Britain and Australia are the leading contenders for gold in the men’s Team Pursuit.

Australian Anna Meares is favourite for gold in the women’s Keirin, but Victoria Pendleton will be determined to triumph for the Host Nation.

Michael Phelps and Chad le Clos are set to go head-to-head once again in the 100m Butterfly at the Aquatics Centre.

Phelps, now the most decorated Olympian in history, was forced to settle for silver when South African Le Clos narrowly beat him in the 200m Butterfly earlier in the week, and the USA swimmer will be out to set the record straight.

Great Britain’s Rebecca Adlington will defend her 800m Freestyle title after winning a bronze in the women’s 400m Freestyle.

There will also be finals in the men’s 50m Freestyle and the women’s 200m Backstroke.

It promises to be another exciting day in the Rowing at Eton Dorney, with finals of the men’s Pair, the men’s Single Sculls, the men’s Quadruple Sculls and the women’s Double Sculls to look forward to.

The men’s Trampoline final will take place at the North Greenwich Arena, while the men’s Individual Archery final will be held at Lord’s.

The final of the men’s 25m Rapid Fire Pistol and men’s 50m Rifle Prone will take place at The Royal Artillery Barracks and Wembley Arena will be the venue for the medal decider in the Mixed Doubles Badminton competition.

Judo, Weightlifting and Fencing medals will also be decided.