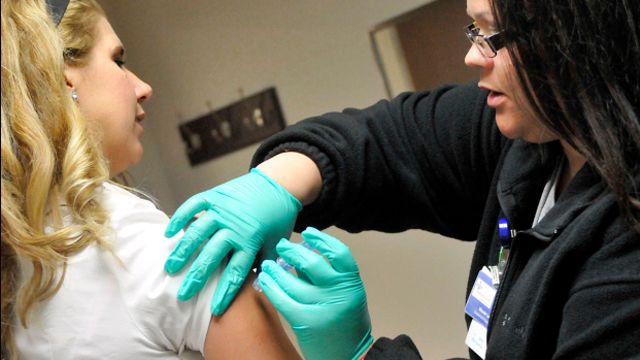 Getting a “flu” vaccine during pregnancy is safe for both the mother and her unborn baby and can protect both of them from the influenza virus infection and its possible health consequences.

Health complications resulting from influenza infection, such as pneumonia, can be serious and even deadly, according to the March of Dimes, which recommends that pregnant women, and women who expect to become pregnant, get an annual “flu” shot.

The U.S. Centers for Disease Control and Prevention recommends that everyone six months or older, including pregnant women, be vaccinated against the influenza virus.

“Early fall is not too early for pregnant women, and women who expect to become pregnant, to get their flu shot. The influenza virus poses a serious risk of illness and even death,” said Siobhan Dolan, MD, MPH, an obstetrician-gynecologist at Montefiore Medical Center in Bronx, N.Y., medical advisor to the March of Dimes and author of Healthy Mom, Healthy Baby. “Babies born to mothers who got their flu shot while pregnant were protected from serious illness with influenza during their first six months of life.”

Studies, which looked at thousands of pregnant women who received the seasonal “flu” vaccine, found that their babies did not have a higher risk of being born too soon or developing a birth defect when compared with babies born to women who did not get a vaccine. Also, researchers found that women who were vaccinated were less likely to experience a stillbirth.

In addition to getting their annual “flu” shot, pregnant women can lower the risk of catching influenza by limiting contact with others who are sick, coughing or sneezing into a tissue or an arm, not touching the eyes, nose and mouth, washing hands with soap and water before touching others, using sanitizers, using hot, soapy water or a dishwasher to wash the dishes and utensils, not sharing the dishes, glasses, utensils or toothbrush. Also, those who live with pregnant women, or are in close contact with them, should be immunized.

Unimmunized pregnant women who develop influenza infection symptoms such as fever, muscle aches, and cough should contact their health providers as soon as possible to begin the treatment.

In 2013, the March of Dimes celebrates its 75th Anniversary and its ongoing work to help babies get a healthy start in life. Early research led to the Salk and Sabin polio vaccines that all babies still receive. Other breakthroughs include new treatments for premature infants and children with birth defects. About 4 million babies are born each year in the United States, and all have benefitted from the March of Dimes funded life saving research and education.