“For young Americans, through no fault of their own, their story is one of few opportunities, delayed dreams, and stalled careers. Today’s unemployment numbers tell the story of millions of young Americans who are paying the price for the failed policies coming out of Washington that have inhibited economic opportunity and job creation.

“Despite the challenges they face, this generation is not asking what their country can do for them. Instead, they stand ready to do more for their country, to continue their service beyond the contributions they have already made as brave defenders of freedom across the globe, as selfless rebuilders of disaster-torn communities here at home, and as confident advocates for greater opportunity for all Americans.

“While leaders in Washington travel to communities to make campaign promises and seek to place blame for the results of their failed policies, young Americans are looking for more than rhetoric.

“In 2012, their message to candidates is clear – we want to build our careers, get on with our lives, and fulfill our dreams. If the only solutions you offer mean less jobs and more debt for the country, the stakes are too high to risk our vote on a bad bet.”

Generation Opportunity has been encouraging its Facebook fans, as well as its thousands of grassroots supporters across the nation, to call the White House at (202) 456-1414 and demand that the policies of the last three and a half years, which have stifled job creation, be reversed in favor of policies that free up Americans to create jobs, to hire, and to restore the American tradition of access to opportunity for all.

To see our Facebook call to action, go to: https://www.facebook.com/BeingAmericanByGO 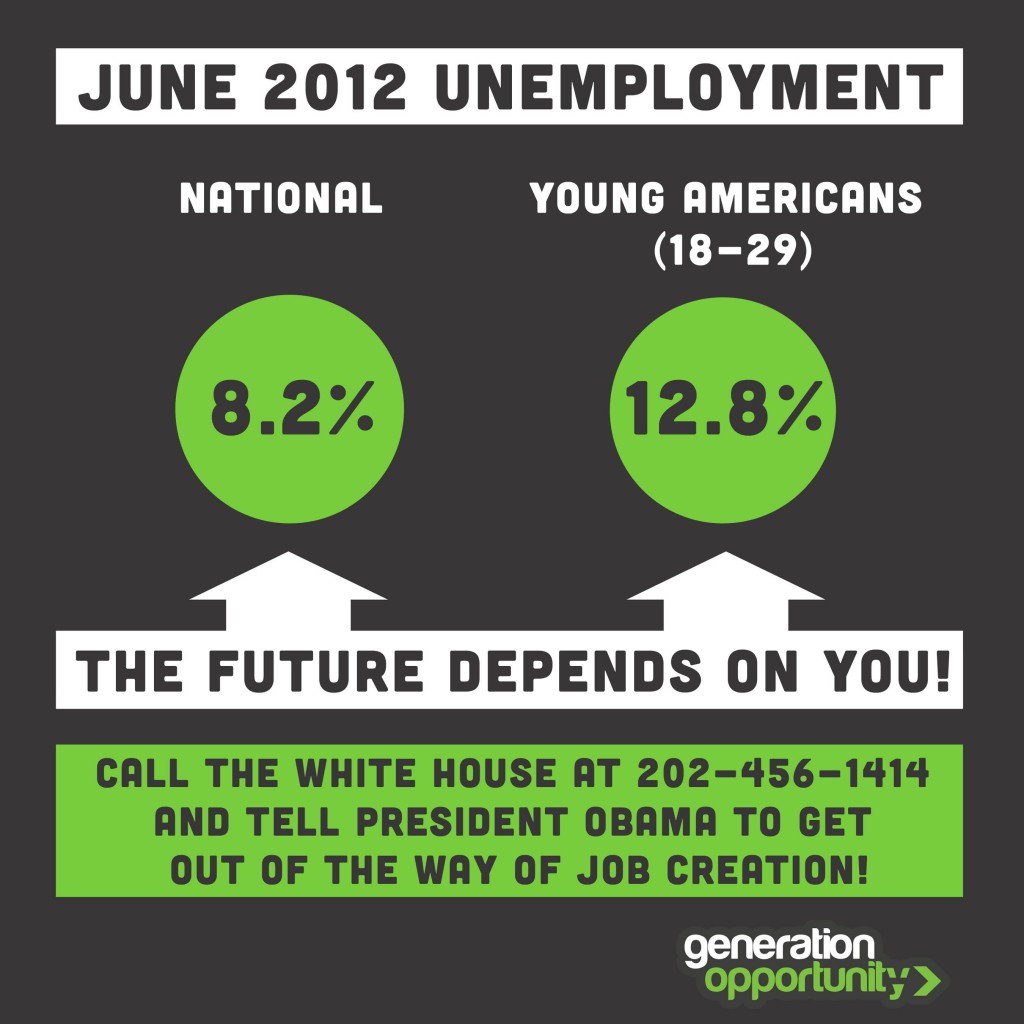 Generation Opportunity is a non-profit, non-partisan 501 (c)(4) organization that seeks to engage everyone from young adults, to early career professionals, college students, young mothers and fathers, construction workers, current service men and women, veterans, entrepreneurs, and all Americans who find themselves dissatisfied with the status quo and willing to create a better tomorrow.

Generation Opportunity operates on a strategy that combines advanced social media tactics with proven field tactics to reach Americans 18-29. The organization’s social media platforms – “Being American by GO,” “The Constitution by GO,” “Gas Prices Are Too Damn High,” and “Keep Texas Awesome” on Facebook – have amassed a total fan base of more than 3.4 million. All four pages post links to relevant articles and reports from sources ranging from the federal Government Accountability Office (GAO), to The New York Times, The Washington Post, The Brookings Institution, The Wall Street Journal, The Huffington Post, and The Heritage Foundation.