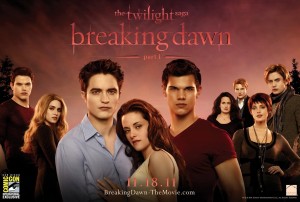 I was sucked into the Twilight phenomena early on because my sister and her friends made the premier night of each of the movies an “event.” Dinner, shopping, mani/pedis and finally the movie. When we settled into the theater to watch the first movie on premier night, at midnight, I wasn’t sure what to expect. The theater was packed, seating was reserved, and there was a man sitting to my right who looked like he didn’t want to be there. When the Cullens came on the screen, the audience screamed. When Edward came on the scene, the audience screamed. When Jacob took his shirt off, the audience screamed. The man sitting next to me leaned over and asked, “Are they going to do that EVERY time one of those yahoos walks on the screen?” I had to laugh, because his wife was one of the screamers right behind him. I grinned, nodded and replied, “They are, and as long as you don’t scream we’ll be okay.”

My sister, being who she is, screamed when Charlie first showed up in the movie, and then collapsed in laughter as everyone looked at her astonished. She said somebody needed to scream for him because he was the sexiest.

In case you’ve missed the point, there are those who live and breathe and die by Stephenie Meyer’s Twilight Saga, and there are those of us who go just for the sheer entertainment of watching people watch the movies.

Now to the actual movie review of Breaking Dawn, Part 1. As you can imagine, I settled in for an evening of people watching, but ended up getting completely sucked into the movie. Like the books, each movie has improved in quality and depth, and Breaking Dawn, Part 1 has exceeded my expectations. Director, Bill Condon has done amazing things with the characters of Edward, Bella and Jacob. Shhh, I’ve actually seen the thing three times now, I may need an intervention at some point. But let’s keep that between you and me.

Edward and Bella marry at the beginning of this movie. And although Bella has been asking Edward to make her a vampire for four movies now, it is in Breaking Dawn when it all comes to a point. There is a real life or death struggle as Bella fights to save, and give birth, to her baby. The problem is, the baby is an immortal and half-vampire, as you can imagine that doesn’t settle well with Bella’s human body. But she is willing to give her life, for the life of her child. On the other hand, Edward wants Bella to live, and her certain death in giving birth to his child is not something he can live with. And, oh, there is the twist with Jacob as well.

So settle in for a couple of hours of Edward, Bella and lots of vampires and werewolves, because Breaking Dawn, Part 1 is worth watching.

Warning: The honeymoon scenes are a little graphic, although not over the top. I thought it was handled relatively tastefully considering the underlying problem Edward and Bella face. In addition, the birth scene is bloody and graphic as well. I would not recommend letting any young girls watch this movie. I would definitely keep the minimum age at 13.