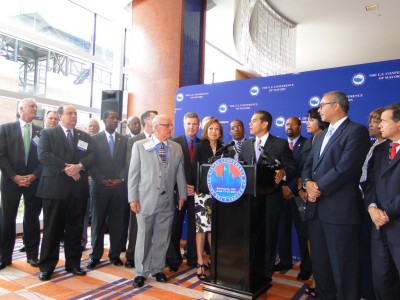 By The U.S. Conference for Mayors, Special for USDR

On Monday, the U.S. Conference of Mayors released a new report that documents the gradual, but dramatic shift over the past 40 years of income distribution in the U.S. in favor of upper-income households.

The report examines the growing economic crisis in three key areas: the wage levels of jobs lost during the Great Recession of 2008 versus those regained; the distribution of income in the US and across its metro regions; and a projection of median income growth for the U.S. and all metro areas.

Overall, the report projects a further drift toward inequality in the coming years, making income inequality a structural feature of the 21st century economy.

The report was released in conjunction with the inaugural meeting of USCM’s Cities of Opportunities Taskforce to be led by New York City Mayor Bill de Blasio and Boston Mayor Marty Walsh at Gracie Mansion in New York City on Monday.

The Task Force, which was established at the Conference’s Annual Meeting this past June, is focused on strategies for addressing income inequality, promoting economic mobility and creating jobs in America’s cities.

In attendance at Monday’s meeting were USCM President and Sacramento Mayor Kevin Johnson, NYC Mayor Bill de Blasio, BostonMayor Marty Walsh and more than thirty participating mayors from across the country who will discuss the report as well as policy measures to address income inequality and close the widening wage gap.

The U.S. Conference of Mayors is the official nonpartisan organization of cities with populations of 30,000 or more. There are nearly 1400 such cities in the country today, and each city is represented in the Conference by its chief elected official, the mayor.

SOURCE: The U.S. Conference of Mayors