This Veterans Day, The National WWII Museum debuts its latest immersive exhibit that unfolds on a stationary train modeled after the iconic Pullman sleeper cars of the 1940s, allowing guests to experience the sights, sounds and emotions of going off to war.

The Train Car Experience is housed in the Museum’s Louisiana Memorial Pavilion and re-creates the wartime departures of America’s service men and women, who embarked on journeys that would change their lives. For most, it was an unforgettable moment of goodbye. 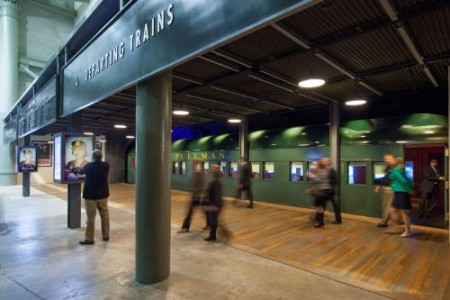 “The train took our fighting forces away from their loved ones and sent them to war,” said Dr. Gordon H. “Nick” Mueller, President and CEO of The National WWII Museum. “Situated near the Museum’s entrance, this new exhibit will give our guests a feel for these poignant leave-takings that occurred in every corner of the country. It is the perfect start to a visit with The National WWII Museum.”

In the five-minute experience, up to 26 guests enter the train platform while videos show vintage photographs, historic headlines and archival film footage depicting the Axis’ rise to power and their threat to democracy. Upon boarding the train, guests hear the sound of the train roaring to life as video stretched across train windows simulates a train pulling out of the station. The view transforms into landscapes from all corners of the nation. Big Band and other 1940s music plays, and visitors watch a vintage scrapbook that opens to reveal the colorful personal stories of service men and women.

During the war, America’s trains were the primary means of moving service men and women across the country – taking them to basic training, advanced training and finally to deployment. Trains also carried them back for leave time. Between December 1941 and June of 1945, American railroads provided 44 million rides to service men and women – totaling nearly three trips for each of the 16 million people in uniform.

“I’d just made 18 years old and I’d never been further than 20 miles from New Orleans when I found myself on a train going all the way to San Francisco. My mother, girlfriend and sisters saw me off. I was more excited than scared at that point,” said WWII veteran and Museum volunteer Forrest Villarubia. A Marine who served in the Pacific, Villarubia also returned home on a train. “The picture I have in my head is coming over the Mississippi River Bridge. I went outside to look at the city, and was overwhelmed that I had made it back to New Orleans. To be honest, I did not expect to come home.”

The National WWII Museum Train Car Experience was made possible through a gift from The Bobby and Lori Kent Savoiefamily in honor of Lori’s father, Leroy Wayne “Pete” Kent, a World War II veteran. Pete Kent joined the Navy in 1943, two weeks after graduating high school. He was selected to participate in the V-12 program at Rice University, part of a national effort to supplement the force of commissioned officers in the US Navy during World War II.

“Like so many World War II Veterans, Pete Kent was a simple, honest and decent man. On this special day we gather to honor and thank him for his service to our country,” said Bobby Savoie, a former member of the Museum’s Board of Trustees. “It is the hope of our families that this Train Car Experience will allow current and future generations to understand, in some small way, how it felt for these young men and women to leave everything they knew and loved to go off to a foreign land and face the hell of war, in the hope that no future generations will ever again face such a choice.”

The National WWII Museum is proud to partner with Union Pacific Railroad for the Grand Opening of The Train Car Experience. This great American company played an essential role during World War II as rail systems transported members of all branches of service, military equipment and other supplies essential to the war effort.