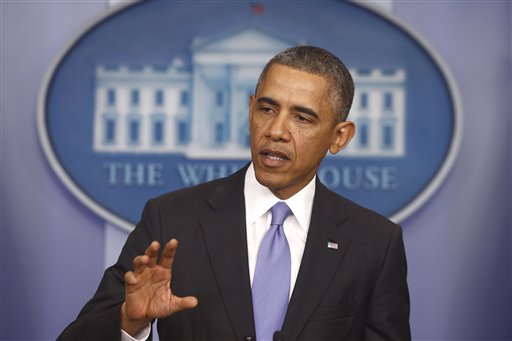 President Barack Obama on Thursday compared the grandfather clause in Obamacare to telling people they have to buy a new car right now even if they can’t afford it – when cars were first required to have seat belts or air bags.

“So what we’re saying now is if you’re buying a new car, you’ve got to have a seat belt. Well, the problem with the grandfather clause that we put in place is it’s almost like we said to folks, ‘You gotta buy a new car, even if you can’t afford it right now,’” he said during Thursday’s press conference on how to fix the Affordable Care Act.

“And sooner or later, folks are going to start trading in their old cars, but if their life circumstance is such that for now at least, they want to keep their old car even if the new car is better, we should be able to give them that option, and that’s what we want to do,” Obama said.

According to healthcare.gov, grandfathered health insurance plans “are those that were in existence on March 23, 2010 and haven’t been changed in ways that substantially cut benefits or increase costs for consumers. Insurers must notify customers with these policies that they have a grandfathered plan.”

The president was responding to a reporter’s question about how confident Obama was that state insurance commissioners will allow the old policies to be renewed for a year – the president’s fix for customers whose policies were discontinued by their insurance providers.

“Today’s fix that you just announced leaves it up to state insurance commissioners and insurance companies to ultimately decide whether to allow the old policies to be renewed for a year. How confident are you that they will do that?” the reporter asked.

Obama said his solution basically says that the Affordable Care Act would not be a factor in what happens in the individual market. He predicted that “a number of state insurance commissioners” would exercise the one-year option, but there are some states that already have “almost all the consumer protections” that Obamacare requires.

“In others, there are pretty low standards, so you can sell pretty substandard plans in those markets, and that’s where people might see a bigger jump in their premiums,” the president said.

Although there will be a state-by-state evaluation in how this fix is handled, the president said he and his health insurance law will not get in the way of Americans shopping in the individual market that they used to have.