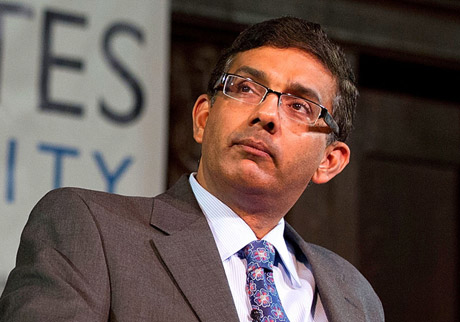 D’Souza is arrested and his co-producer shows his support in this open letter.

In America, we have a long tradition of not doing what is commonly done in too many other countries — criminalizing dissent through the selective enforcement of the law. But that has seemingly changed in Obama’s America.

Yesterday, I explained the politically-motivated events that led to Dinesh’s indictment on campaign-finance charges to the Hollywood Reporter. In the same article, I explained that the Feds have chosen to pursue this alleged minor violation in the same way the IRS targeted conservative Tea Party groups for retribution. In light of the way the IRS has been used to stifle dissent, this arrest should send shivers down the spines of all freedom-loving Americans.

Our production team for America has issued the following statement: “We believe this is an unfortunate misunderstanding arising out of Dinesh D’Souza’s desire to help the uphill campaign of a friend. There was no intent to do anything illegal or corrupt in any way. This will have no impact on the film America, which will be released on the Fourth of July this year as previously announced. Filming is on schedule and D’Souza will continue to lead the enterprise.”

Neither the filmmakers nor the American public can allow this prosecution to deter us from the film’s release, and I am calling upon the American people to show their elected officials that this kind of selective prosecution will not stand by joining us at the box office.

I look forward to my good friend Dinesh being vindicated as we hold federal authorities accountable to enforce the law equally and without mind to their personal political agenda. You can leave your support on Dinesh’s Facebook Page and with a #StandWithDinesh tweet.

As one insightful commenter wrote on the article in THR, Obama’s DOJ is out to settle scores.