By FAIR Health, Special for  USDR

In its latest white paper, FAIR Health analyzed data from its database of more than 23 billion privately billed healthcare claims to study the opioid crisis in rural and urban settings, in the nation’s five most populous cities (Chicago, Houston, Los Angeles, New York and Philadelphia) and in their respective states during the recent ten-year period 2007 to 2016. The term “opioid-related diagnoses” referred to four diagnoses: opioid abuse, opioid dependence, heroin overdose and opioid overdose (i.e., overdose of opioids excluding  heroin). 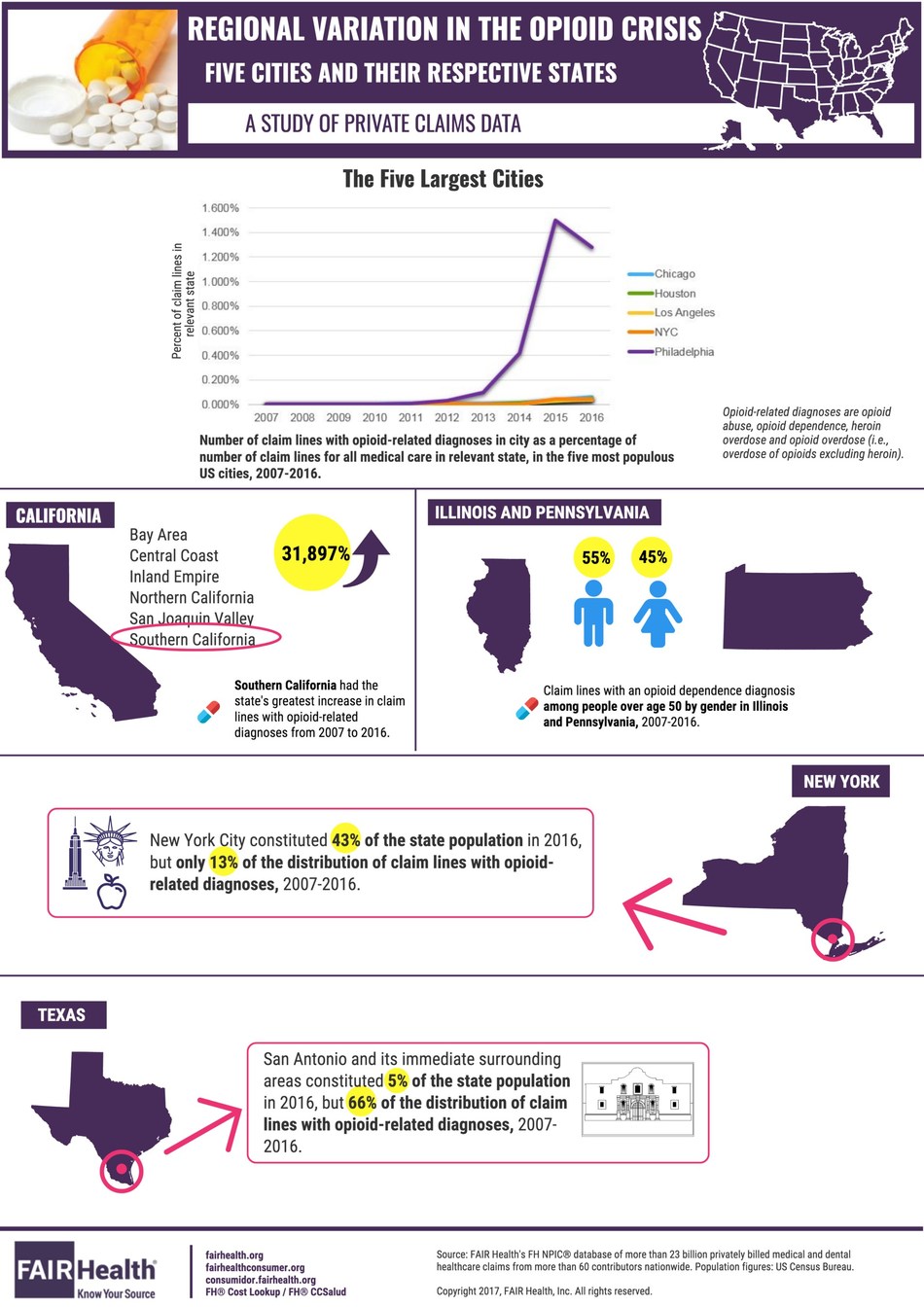 Regional Variation in the Opioid Crisis: Five Cities and Their Respective States

FAIR Health President Robin Gelburd commented: “FAIR Health is committed to using its vast data repository to shed light on the opioid crisis. By spotlighting the substantial regional variation in opioid-related diagnoses and procedures, we hope to contribute to the work of those addressing this national  epidemic.”

FAIR Health is a national, independent, nonprofit organization dedicated to bringing transparency to healthcare costs and health insurance information through data products, consumer resources and health systems research support. FAIR Health oversees the nation’s largest collection of healthcare claims data, which includes a repository of over 23 billion billed medical and dental procedures that reflect the claims experience of over 150 million privately insured individuals, and separate data representing the experience of more than 55 million individuals enrolled in Medicare. Certified by the Centers for Medicare & Medicaid Services (CMS) as a Qualified Entity, FAIR Health receives all of Medicare Parts A, B and D claims data for use in nationwide transparency efforts. FAIR Health licenses its privately billed data and data products—including benchmark modules, data visualizations, custom analytics, episodes of care analytics and market indices—to commercial insurers and self-insurers, employers, hospitals and healthcare systems, government agencies, researchers and others. FAIR Health has earned HITRUST CSF and Service Organization Controls (SOC 2) certifications by meeting the rigorous data security standards of those organizations. As a testament to FAIR Health’s data security and validation protocols, its data have been incorporated in statutes and regulations around the country and designated as the official, neutral data source for a variety of state health programs, including workers’ compensation and personal injury protection (PIP) programs. FAIR Health data serve as an official reference point in support of certain state balance billing laws that protect consumers against bills for surprise out-of-network and emergency services. FAIR Health also uses its database to power a free consumer website available in English and Spanish and as an English/Spanish mobile app, which enable consumers to estimate and plan their healthcare expenditures and offer a rich educational platform on health insurance. The website has been honored by the White House Summit on Smart Disclosure, the Agency for Healthcare Research and Quality (AHRQ), URAC, the eHealthcare Leadership Awards, appPicker, Employee Benefit News and Kiplinger’s Personal Finance. FAIR Health also is named a top resource for patients in Elisabeth Rosenthal’s new book, An American Sickness: How Healthcare Became Big Business and How You Can Take It Back. For more information on FAIR Health, visit  fairhealth.org.