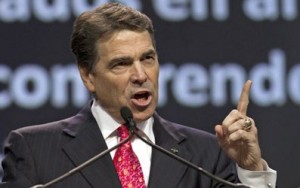 It would not be a surprise that a governor running for president from a state known for its oil production, would try to reenergize his faltering campaign with an energy policy.  That is exactly what Gov. Rick Perry did today as he unveiled his Energizing American Jobs and Security plan to “spark 1.2 million American jobs,” while reducing our “nation’s dependence on energy from nations hostile to the U.S.” Most of the plan can be implemented through executive branch action, without Congressional action and free of Washington gridlock. This obviously resonates considering the fact that the current government would be better known as “mutual hostage taking” rather than “checks and balance.” Gov. Perry announced his plan at the United States Steel Mon Valley Irvin Plant.

“This American jobs plan is based on a simple premise: Make what Americans buy, buy what Americans make, and sell it to the world,” said Gov. Perry. “We are standing atop the next American economic boom – energy – and the quickest way to give our economy a shot in the arm is to deploy American ingenuity to tap American energy. But we can only do that if environmental bureaucrats are told to stand down.”

Gov. Perry’s Energizing American Jobs and Security plan is the first part of a broader package of economic reforms that he will present to the American people in the coming days. The Perry campaign sees such as crucial for getting the Governor’s faltering candidacy back on track after several poor debate performances.  The campaign argues this bill will create jobs in “every sector, reduce our nation’s dependence on hostile foreign oil, revitalize manufacturing and help contain the cost of electricity and fuel.”

According to the plan, first, Gov. Perry will open several American energy fields for exploration that are currently limited, including those in the Gulf of Mexico, Alaska, the Mountain West region and the Northeast Marcellus Shale. These actions will generate “billions of dollars in royalty payments” that will help pay down our “nation’s skyrocketing deficit.” Perry also supports the construction of the Keystone XL pipeline that will transport Canadian oil to U.S. coastal refineries.

The governor also noted the importance of having the states more involved in energy exploration, including decisions to not pursue development in certain valuable areas such as the Everglades or Yellowstone National Park. However, such instances should represent the exception, not the rule.

Second, the governor’s plan will eliminate “activist regulations that are on the books and under consideration by the Obama Administration, which are estimated to destroy up to 2.4 million American jobs and add $127 billion in costs to electric providers and consumers.” President Rick Perry will call for immediate review of such rules and implementation of cost-benefit analyses to determine their impact on American employers and the environment.

“If we face the facts, we know that none of these rules were needed to reduce emissions of the six principal pollutants by 50 percent since 1980,” Gov. Perry said. “And they are not needed now, especially as our economy hangs in a fragile balance between recovery and recession.”

The governor will also specifically remove the Environmental Protection Agency’s (EPA) authority to regulate greenhouse gases, which was provided under a controversial ruling by a federal court without the approval of Congress.  In this policy decision, Perry is taking aim at one of the most popular political footballs among conservatives today — the far reaching EPA, which has demonstrated a policy approach which seems far out of touch from reality (e.g., trying to prohibit “dust” in areas like West Texas).

Third, Perry “pledged to work with Congress to dismantle the EPA in its current state and rebuild a scaled down agency focused on regional and cross-state issues, providing scientific research, environmental analysis and cost-comparison studies to support state environmental organizations.” He said, “I reject the notion that Washington is more committed to environmental stewardship than state and local officials who must live with the consequences of their own environmental policies.”  Again, in light of the aggressive policies of the current EPA and the interest in increasing the powers of the states, this policy should be well received by the GOP rank and file.

Finally, Perry will “level the playing field among all energy producers, working with Congress to phase out direct subsidies and tax credits that distort the energy marketplace.” He will however preserve “tax incentives for research and development.” Gov. Perry will also put an end to the Obama Administration’s “agenda-driven hostility toward coal and natural gas,” which provide roughly two-thirds of American electricity, noting that technologies in place today and currently under development can ensure cleaner development of conventional sources.  This is important because it shows that his interests are greater than his Lone Star State.

“I do not accept the false choice that we must pick between energy and the environment,” the governor said. “It is time for a balanced, pro-American, pro-jobs energy policy.

“The choice in this election is between two very different visions for our country. When it comes to energy, the president would kill domestic jobs through aggressive regulations, while I would create 1.2 million American jobs through safe and aggressive energy exploration at home. President Obama would keep us more dependent on hostile sources of foreign energy, while my plan would make us more secure by tapping America’s true energy potential. The president’s energy policies are driven by the concerns of activists in his party, while my policies are driven by the concerns of American workers without jobs.”

Gov. Perry concluded, “It’s time to end the over-regulation, excess litigation, and bureaucratic intimidation. Let’s get back to what works to get America working again: Make what Americans buy, buy what Americans make, and sell it to the world.”

Perry’s proposal has promise.  It does not depend on government legislation, it addresses one of the country’s biggest burdens (energy costs), and it offer promise for job creation.  However, some may only interpret it as an energy plan and wondering if that is all a Texas governor has to offer.  This will require a well informed electorate in order to raise his support.  Time will only tell if it succeeds.