At least 40 Churches across Egypt have been burnt and destroyed by Muslim Brotherhood supporters in under 24 hours.

Coptic Christians all over the world following the current violence and events in Egypt with lifted hearts praying to God that He has compassion on the beloved people of Egypt and alleviates the distress of terrorism and terrorists’ attacks.

Organizations speaking on behalf of the churches prepared a statement stating “Christians all over the world condemning the terrorist attacks by the Muslim Brotherhood on innocent Christians, churches, monasteries, Christian schools and property of Christians. What is happening against innocent Christians in Egypt is the result of the suffering of Christians for many decades of hate speech and incitement against them and the repeated attacks on their lives and their churches and their property with the inability of the consecutive governments to provide them with security, safety and the rights of citizenship.” 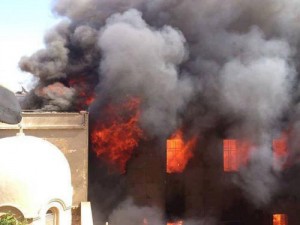 Metropolitan Mikhail of Assuit – “Today the churches of Egypt became like a censor with fire coming out of it mixed with incense raised to the heavens as a sweet aroma so that God may have compassion on His people and perform unprecedented wonders.

“The Christians of Egypt trust in Almighty God who defends the oppressed and avenge them. They trust that our country, Egypt, with its ancient history will be able to pass through this great ordeal.

Copts and other Christian sects in Egypt are confident that the people of Egypt, both Muslims and fellow Catholics can come together against the evil forces of terrorism.

“We ask that all the people of the Coptic Church and fellow Christians to unite in prayers and fasting during these blessed days, which bear the name of our compassionate mother and faithful intercessor the Holy Virgin Mary, Mother of Light.

“Copts express our condemnation and rejection of the injustice of our loved ones in Egypt, through all peaceful and legal means in our American society that gets an incomplete and sometimes inaccurate picture of the violence by terrorist groups against innocent people, especially the Copts. Each and every one of you has the responsibility to witness to the truth and expose injustice and evil.

“We Christians pray for the peace of Egypt and its people and we are confident in the work of our Almighty God who blessed the people of Egypt.”