Rush Limbaugh, the country’s most listened to talk show host, became missing in action for  a while as he parted ways with his radio network.  He has a new home and he recently talked about it on his program. Here is a transcript of that program:

So I got in here at the usual time after working very early this morning, late into last night on show prep and stuff, and at about ten o’clock I get an e-mail from Greta Van Susteren, and I thought, “No, no, no, no, I just did her show.  She can’t be asking me back.”  And it wasn’t that.  Her e-mail was, “Man, oh, man, do you live rent free in Obama’s head.”  And I said, “What’s this?”  So I read further, and she just assumed that I knew what she was talking about, and I didn’t, but I keep scrolling her e-mail and she’d finally attached a Mediaite story in which President Obama, in an interview this morning on CNN with Chris Cuomo, once again blamed me for the gridlock in Washington.

I am the reason he can’t move his agenda forward, which of course is silly because he’s getting everything he wants.  He blamed me again.  I mean, it’s like a broken record.  You know what I think is happening?  I think that nobody’s listening to Obama anymore.  I don’t think he commands nearly the attention or the interest that he did.  So what he’s doing is going back to the greatest hits, kind of like if you’re at a radio station and losing audience, play the hits, you know, stop the New Age stuff and go play the hits.  Well, he’s going back and he recycled this idea that the Republicans are not cooperating with him because they’re afraid of what I’m gonna say about them.

The Republicans are not listening to me!  The true irony here is the Republicans are not listening to me.  I don’t know who the Republicans are listening to outside of their consultants, but they’re not listening to me, but he’s gotta blame somebody.  But for what?  I mean, from his standpoint, hell, he just made a move — did you hear what Chuck Rangel said?  Charles Rangel, on MSNBC, said that no student ought to ever have to pay to go to college.  Now, there’s more to this than meets the eye.  ‘Cause you have to couple that with the fact that the government runs the student loan program.  So I will explain that as the program unfolds. I did not even intend to mention that right now.  I want to reserve that and then push it back later.  But his reasoning is, “Hey, look, we’re not competing with ourselves.  We’re competing with China.  Why should we have our students have to pay to educate themselves when it’s in our best interests that they be educated?”

I mean, it’s a total statist view of everything.  The idea that a student would not be competing with other students is totally foreign to him. The idea that the only reason the student is being educated is to compete against China.  It’s really silly.  But the point was put forth, the Millennials are gonna eat this up.  ‘Cause how many people have you heard, New Castrati say, “Yeah, it’s immoral that we should have to pay to be educated, just like it’s immoral we have to pay for health care.”

So, anyway, blame me.  The president of the United States seems to think that I’m something more than relevant.  It was just two weeks ago, let’s review, shall be?  Two weeks, three weeks, a month ago, you couldn’t turn on the Drive-By Media without reading that I was finished.  Let me tell you what you had read.  Because I have an announcement to make here.  I wasn’t gonna do this, either.  My broadcast partners do not know I’m gonna do this, but I’m gonna go ahead and do this. (interruption) What, you think I shouldn’t do this?  You don’t think I should?

The last month, if you read Politico or anything that linked to Politico or CNN or ABC or anywhere else, you were reading that it was over for me. That I was bad news for broadcast stations. They could not sell advertising and all of this was because of me and the controversy I engender and therefore I wasn’t gonna be gone overnight, but three to four years, and that’s it.  Fini, totala completa, out of there, gone. Once and for all the left would be rid of me. 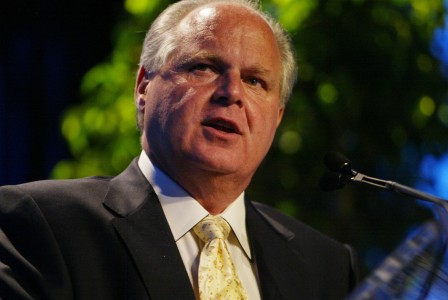 We’re on 600 radio stations, and the way that was gonna happen was that a group owner, Cumulus Media, was going to cancel their contract with me on 35 of their radio stations, and that was going to end my career because one of those 35 was WABC in New York and WLS in Chicago and WMAL in Washington and WBAP in Dallas and WJR in Detroit and other such large markets.  And once that happens, sayonara, I’m in everybody’s rearview mirror.

This has been going on for a year.  We have negotiations with every radio station that carries the program, every group owner.  These negotiations just happened to end up in the public.  But the media believed everything that was being said because they wanted to.  And the image, I guess, that was created was that my heyday was gone, it was over with, and if you listen to me now, you better like it while you can, because you’re not gonna be able to at the end of the year, ’cause I’m gonna be gone.

Well, let’s see.  On either Wednesday night or Thursday, we completed our negotiations with Cumulus Media, and there will not be any changes.  I will continue to be on their radio stations for the next three years.  It was really never in doubt, but I don’t want to do my own version of negotiating here.  The only change that’s going to happen is that on January 1st we are going to leave WABC and move to WOR in New York.  My syndication partner is Clear Channel Communications, and they own WOR, and so we’re gonna go to our own radio station in New York.  And this has been mutually agreed to.

The bottom line is, no change for you.  Wherever you’re listening to this radio show today, you’re gonna be able to hear it on January 2nd, 3rd, whenever I get back from the traditional Christmas break.  There will be no interruption to you.  There will be no change.  The radio program is as strong or stronger than ever.  It will be everywhere you are used to listening to it now.  If you like this station, you get to keep this station.  I’m not gonna take this station away from you and force you to go to a new one, as Obama’s doing with your health care.  He said if you like your doctor, you like your plan, you get to keep it.  No, you don’t.  You’re gonna lose your doctor; you’re gonna lose your plan.

But I am the Doctor of Democracy.  I am America’s Truth Detector.  And as the Doctor of Democracy, the deal you have with your doctor isn’t changing.  You get to keep your doctor. You get to keep your plan. You get to keep your station.  Nothing’s changing, and it really never was gonna change.  These were just public negotiations, which normally don’t occur in public.  But the media got involved.  So the point is that the past month in the Drive-By Media, I was over, it was finished.  You better listen while you can because I was gone, I was ineffective, I was a has-been, it was old news, whatever happened on this program.

He’s been saying the same old thing over and over. Nothing is changing. Everything is getting worse. We’ve got documentation in the form of news stories today about how the economy is literally getting worse — and it’s bad in home starts, any other number of things.  Today, I am back to being his number one obstacle.  Your host, the Doctor of Democracy, El Rushbo, for the past month was a has-been and I should just go ahead and resign while I’m at the top, they all said.

Now I’m back to being the number one obstacle.