NBC News declared Walker the projected winner over Democratic challenger Tom Barrett, the mayor of Milwaukee, in the closely-watched campaign, an outgrowth of a contentious fight in early 2011 after Walker drove a bill stripping public employee unions of their collective bargaining rights through Wisconsin’s legislature. 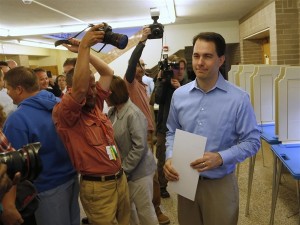 Walker’s victory served as a symbolic victory for a generation of reform-minded conservatives; the crowd at Walker’s Waukesha election night party let out a large cheer when a local NBC affiliate showed the projection of Walker’s victory.

The outcome in Wisconsin was a bitter disappointments to Democrats and labor unions who had vowed to seek the Republican governor’s ouster over the collective bargaining law. Tens of millions of dollars flowed into the state both in support and opposition of Walker, reflecting the high stakes riding on the race.

Wis. recall may offer some closure, but divisions remain

But the closing weeks of the campaign touched little on the issue of collective bargaining itself. Walker barnstormed the state emphasizing positive job numbers since he took office, and the improved state budget situation. He argued that voters had tired of the recall efforts, which resulted in the ouster of several state senators last summer…(read more)