Governor Rick Scott has already declared he will not implement Obamacare in his state, many other states have already entered bills in their legislatures to nullify the controversial legislation, and one of the leading members of the US Senate is leading the charge.

Sen. Jim DeMint (R-SC) came out ready to fight following the Supreme Court’s decision on Obamacare and he is calling on the states to do the same thing. Furthemore, he argues that they have the power to do something about it. 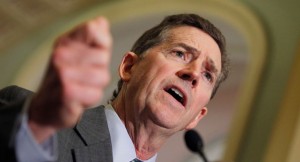 The Senator has released the following statements regarding Obamacare:

“The Supreme Court may have failed to stop this government takeover of health care, but the American people will not.  Since the day this law was rammed through Congress, the American people have demanded repeal, and today’s ruling doesn’t make Obamacare any less dangerous to our nation’s health. Freedom-loving Americans are disappointed, but we cannot be discouraged.

“The President’s health care law must be fully repealed as all of its promises have proven false. We were told it was not a tax hike, but this ruling confirms it is an unprecedented and enormous tax on the poor and middle class Americans. President Obama needs to explain why he is enacting this middle class tax hike over the objections of the American people during the worst economic recovery since the Great Depression.

“This government takeover of health care remains as destructive, unsustainable, and unconstitutional as it was the day it was passed, unread, by a since-fired congressional majority.  Now as then, our first step toward real health care reform and economic renewal remains Obamacare’s full repeal, down to the last letter and punctuation mark.

“I urge every governor to stop implementing the health care exchanges that would help implement the harmful effects of this misguided law. Americans have loudly rejected this federal takeover of health care, and governors should join with the people and reject its implementation.”

“The President’s health care law will not reform anything, but is already undermining what does still work in America’s health care system.  We cannot build a free market health care system on this flawed structure of centralized government control, we must repeal all of it and start over with commonsense solutions that make health care more affordable and accessible for every American.  We can allow Americans to purchase lower cost plans from other states, support state high-risk pools to cover those with pre-existing conditions, medical-malpractice reform to end frivolous lawsuits, and tax equity so Americans who don’t get their health insurance from an employer are not penalized.”

“Today’s decision, however unfortunate, nonetheless represents an opportunity to all Americans, to claim their right to create a health care system of, for, and by the people, not government or special interests. The American people now have the chance and Congress has the responsibility to fully repeal this Washington takeover and reform health care ourselves, together, around the principles of individual liberty, not government mandates.

“The same freedom that made America strong and prosperous will make us healthier, too, so long as politicians remember that the health care system is supposed to serve our people, and not the other way around.”