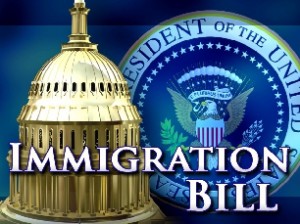 In a special online video report, retired L.A. County Sheriff Sgt. Richard Valdemar told Full Disclosure Network(R) of his testimony before a Senate Committee hearing on the controversial Immigration Bill S744 that was recently approved by the U.S. Senate.  He opposed passage of the bill because he said it is basically an amnesty bill that will award U.S. Citizenship to 11 million illegal immigrants.  As a nationally known Law Enforcement specialist in international gangs, he claims it will be impossible to screen and process the millions of illegal aliens for terrorist ties and criminal backgrounds, and will have a devastating impact on the future of the USA.
Watch Video Here& Vote in Opinion Survey at this URL.

In a second short online video, Sgt. Valdemar relates his first-hand experience, where he was a part of a group of Western States law enforcement officials, including, elected County Sheriffs, attempting to present objections to the Immigration Bill before a Senate Committee hearing when a U.S. Senator and Committee Staff members took action to discourage their participation. Watch Video Vote In Opinion Survey at this URL.

A special Full Disclosure interview series with Sgt. Valdemar is soon to be released to public cable channels throughout California and in major cities across the country.  All six segments to be available online at www.fulldisclosure.net