One Soldier from the 525th Battlefield Surveillance Brigade is dead and two others are wounded following a shooting incident June 28, 2012. 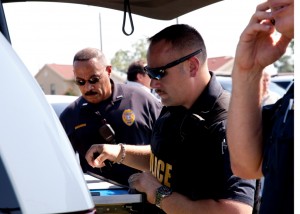 During a unit safety brief a Soldier shot another member of the unit and then turned the weapon on himself. The shooter was injured and is in custody. A third Soldier who was in the area was also slightly wounded in the shooting.

“This is a tragedy for our community. We don’t yet know the reasons for the shooting, but are working with the unit and the affected Families to help them through this difficult period,” said Col. Kevin Arata, XVIII Airborne Corps and Fort Bragg Public Affairs Officer.

“Our prayers are with those who have been affected by this terrible incident,” Arata said.

Fort Bragg law enforcement and emergency responders secured the scene within minutes at the corner of Letterman and Armistead Streets.

Special Agents from the Army Criminal Investigation Command are on the scene and have begun an investigation.

Notification of the next of kin is underway.