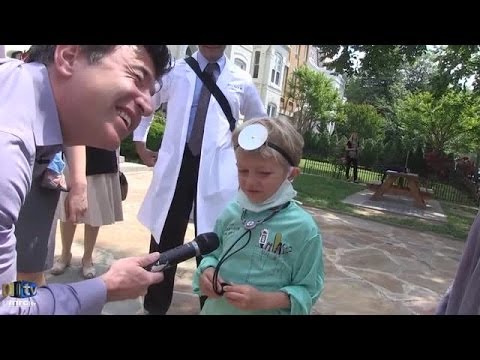 Tots used were used as Props in activists’ gun control effort.Liberal activist group MomsRising.org met in a Capitol Hill church June 3, 2014 to discuss their plans to lobby US Senators, with children, later that afternoon.

In order to maximize media attention, many of the activists brought small children who were dressed up as doctors along with them to the rally.  Parents were encouraged by event organizers to get the children to take photographs with senators to post on Twitter. Because, how can anyone say “No” to an adorable child dressed up in a doctor’s scrubs?
Of course MRCTV was there and quickly exposed the real agenda behind the left’s propaganda.
See the Video here: http://cnsnews.com/mrctv-blog/dan-joseph/tots-used-props-gun-control-activists
All opinions expressed on USDR are those of the author and not necessarily those of US Daily Review.