This past week The Atlanta Journal-Constitution (AJC) revealed the results of an unprecedented investigation exposing more questionable test results in schools across America. Questioning whether the 2011 cheating scandal was unique to Atlanta Public Schools, the AJC found drastic swings in test scores that were considered virtually impossible in Baltimore, Dallas, Detroit, Houston, Los Angeles and St. Louis. Suspect test score changes were also identified in many other cities, which will appear in the report.

This story is set to spark a national debate over the policy and integrity of standardized testing. 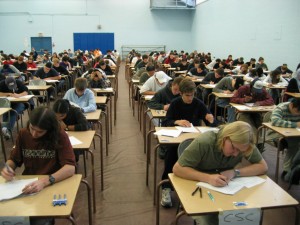 Evidence that suggests possible cheating – the same kind that led AJC reporters and state investigators to uncover widespread and systematic test score manipulation in Georgia – exists across America. In an unprecedented effort, The Atlanta Journal-Constitution spent months gathering and analyzing data and conducting dozens of interviews.

“The implications of our findings are profound, and it’s hard to find a more important story to tell,” AJC Editor Kevin Riley said. “This is about America’s future, and the integrity of standardized testing is central to the policy direction of American schools. Policies require states to test all students in grades 3 through 8 to measure performance in reading and math. Success in America’s schools is now defined by showing improvement in test scores. These results raise troubling questions about the reliability of these tests.”

To reach this conclusion, the AJC’s investigative team gathered data from all 50 states and the District of Columbia. The AJC analyzed test scores in more than 14,000 school districts — and verified the information through four separate independent academic experts. No one else has done such an exhaustive analysis.

A sample of the results:

The first part of the findings was published Sunday, March 25, exclusively in The Atlanta Journal-Constitution. The story, which also includes a database detailing information from each school district, can be found online at ajc.com.