By FreedomWorks.org, Special for US Daily Review.

FreedomWorks for America endorsed Richard Mourdock in October 2011 and has been working around the clock to support the grassroots get-out-the-vote efforts of local limited-government groups like Hoosiers for a Conservative Senate to retire Sen. Lugar and send a true conservative to replace him in Washington. 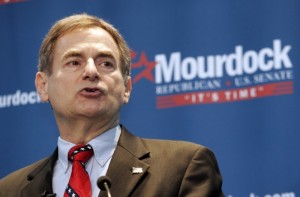 “The limited government movement is alive and well in Indiana,” commented FreedomWorks for America President Matt Kibbe. “Richard Mourdock’s historic underdog victory is proof that grassroots activists, armed with good ideas and hard work, can fundamentally change the Republican Party from the inside out. This is just one more example of the hostile takeover of the Republican Party that we’ve been working on since 2009.”

“Like Dan Liljenquist’s convention upset in Utah last month, this is a victory that will re-ignite the spark of the 2010 midterm elections and energize the movement across the nation to support other conservative House and Senate candidates like Ted Cruz in Texas, Jeff Flake in Arizona and Josh Mandel in Ohio. We won’t stop until we grow not just a Republican majority, but a fiscally conservative majority in both the House and Senate that can drive the legislative agenda to the White House.”

Conservative activists were out-spent by the establishment, but they weren’t out-worked. Since the FreedomWorks for America endorsement in October, activists distributed 15,000 yard signs, knocked on 125,000 doors to distribute voter education materials, and made over 400,000 phone calls to registered voters.

Greg Fettig, a leading grassroots organizer of Hoosiers for a Conservative Senate, commented, “Today Hoosier patriots sent a loud message to Washington: Enough is enough. Senator Lugar became part of the problem in Washington when he put politics and power over good policy and votes. It’s time for a change, and we believe that Richard Mourdock is the best candidate to protect the interests of Indiana and lead us out of our $16 trillion national debt.”

In his 36 years of service in the Senate, Dick Lugar cast many votes to expand the role of the government, including votes for TARP, auto bailouts, liberal Supreme Court justices and SCHIP — a mandated entitlement program that served as the precursor to ObamaCare. Sen. Lugar also voted to raise the debt ceiling 15 times, totaling about $7 trillion- half of the current U.S. national debt.

FreedomWorks for America COO Ryan Hecker commented, “Richard Mourdock’s victory tonight is a clarion call to the political establishment that the Tea Party movement is united and focused on taking back the Senate for economic conservatives. Mourdock holds a bold and consistent commitment to conservative economic policy, and will work well with Tea Party senators like Mike Lee and Rand Paul to protect the Constitution and to repeal ObamaCare in the Senate. We plan to stay very active inIndiana to ensure that Richard Mourdock wins the general election in November.”

FreedomWorks for America is a grassroots Super PAC with over 1.6 million members nationwide, dedicated to electing fiscal conservatives who will advance the principles of lower taxes, less government and more freedom. For more information, please visit www.FreedomWorksforAmerica.org.