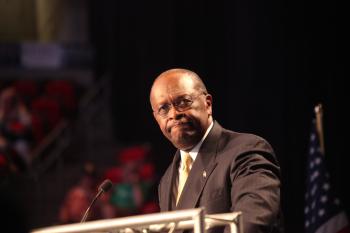 Salon.com has found itself at the center of a story accusing presidential candidate Herman Cain of “sexual harassment.” The accusations are over a decade old and involved his work as President of the National Restaurant Association. That organization has called it a “personnel issue” and could not be more dismissive of it.  Salon and other liberal media have made it into headline news.

During one of my visits on Fox News, the panel I was on spent some time discussing Sarah Palin’s decision some time back not to not run for reelection and, far more surprisingly, to resign as governor.  Her decision to not run for reelection was no surprise, since most thought it made sense for her to pursue the US Senate if she wanted to take her career to the next level (since then she has decided not to run for president or the Senate. However, almost everyone was shocked when she decided to resign from her post as governor.  To me it was an ominous sign of the problem facing conservative minorities and women with presidential ambitions.

I have been arguing that the mainstream media will do everything in its power to prevent a conservative female or minority from being elected to national office. The left has believed that minorities and women would have no political power without the progressive agendas of the past. Therefore, they want to keep these groups on an ideological plantation, with women and minorities marching in lockstep. I assume the progressives don’t realize that the idea behind giving these groups their freedoms, was to empower them to be able to disagree with their agenda. That is, after all, what freedom is all about.  The progressives in journalism want you to feel free to make all the money you want, go right ahead and pursue the career you have passion for, but don’t dare run for the highest office in the land unless you are willing to adhere to the orthodoxy that “gave you” political power.

Immediately, others in the panel disagreed. They pointed to people like Bay Buchanan, who has enjoyed a successful career as a political consultant. She has never faced the scrutiny of the election process, to me it was a weak argument. They then countered with Elizabeth Dole.

There is no doubt about it; Dole has had an impressive career. Former Secretary of Labor, former Secretary of Transportation, and an US Senator, Dole has certainly had a career filled with accomplishments. However, my colleagues were missing the point. You can point to many successful conservative females in politics, but we only have one that was on a national ticket and that was Sarah Palin. Now Dole has run for national office, but had little to show for it.  In fact, she was never a threat to a media that was bent on protecting its orthodoxy (of conservative minorities need not apply).

Back in 2000 Elizabeth Dole pursued the Republican nomination for President. She actually made her announcement in 1999 and pulled out before Halloween of that year. Her candidacy didn’t even have the opportunity to face a single primary because of a lack of funding. The media didn’t have to butcher Dole, because she was never a serious threat. They could even treat her a little like a media darling, because of the fact there was a female Republican pursuing the ticket. That was an interesting novelty, as long as she wasn’t a serious threat.  Even if her candidacy gained legs it is unlikely she would have ever seen the treatment Sarah Palin received.  Dole was a very moderate Republican, while Palin was clearly one of the most conservative governors in the country.

The exclusive way to test my thesis is to apply it only to female candidates or any other minorities, who have actually had the nomination for national office or were very likely to get it. Enter Sarah Palin. Palin was butchered by the mainstream media by every measure. The thought of Palin as Vice President provided nightmares to the left and to the media that now openly supports a progressive agenda.

There has yet to be a black or Hispanic candidate to pursue the GOP nomination that has been taken seriously by the media.  That is until now, with the rise of Herman Cain. Voters have seemed to understood that he is not a career politician and have been willing to overlook his occasional gaffes and even odd, by presidential campaign standards, behavior.  This has happened, in spite of the fact the candidate has been under the constant media microscope.  It has not worked. In fact, the greater the scrutiny, the less the interest in the criticism on the part of the public. Cain seems to be capable, genuine, and has solid leadership skills in their eyes. It was getting to the point — with only a few months from the first real test in Iowa and he is still a front runner — that they are looking at the possibility of him being the nominee. Again, there is nothing more threatening to the progressives, and the media that protects it, than a minority who is conservative. Especially if he or she were the nominee of the Republican Party.  That is why ancient charges that were settled over a decade ago in a manner called a “personnel problem” by the company he was in, is now headline news. The media is threatened.