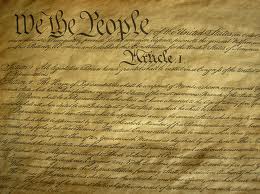 Special to US Daily Review by Keith D. Rodebush

Nations change; but human nature does not. This is the simple truth inherent in the development of the U.S. Constitution. Therefore, the Founding Fathers understood that the Constitution could not be just a document, but must have the force of law. This resulted in the intricate separation of powers and checks and balances that would become the bedrock of our government. As our republican form of government has been eroded we find ourselves at a point where many have asked; “Is the Constitution relevant?” We submit that it is not the relevancy of the Constitution but the disregard for it that plagues our nation. In this section we will periodically give contemporary examples how the Constitution directly relates to our modern lives, and we ignore it at our peril.

Ever wonder how in the world the government decided they have the authority to tell you what light bulb you can purchase? Alexis de Tocqueville warned us about soft tyranny in the 1830’s. The history of the destruction of personal liberty in America is that of great leaps followed by incremental legitimization. While these impositions on liberty are always cloaked in security or comfort, their ultimate cost to our nation are inevitable. The division of powers in our government was intended to keep any person or group from becoming the sovereign over our nation, allowing for tyranny. By giving the Constitution the force of law, the ultimate result of the judicial branch becoming the final arbiter of all things Constitutional was understood to be the weakness. This came to fruition quickly in Marbury v Madison. Marbury didn’t get his commission but the court upheld their ultimate authority to review laws for constitutionality. James Madison intended the tension between the three branches of government to minimize this penultimate authority of the courts. In a 1942 decision called Wickard v. Filburn the Supreme Court of the United States (SCOTUS) ruled that for the federal government to stabilize the wheat market under the Agriculture Adjustment Act (1938), they also must be able to control prices. This stream of logic then resulted in the ruling that a man growing wheat on his own property for his own use, would mean that he would buy less wheat on the open market which could have an aggregate effect on the entire market and was therefore illegal. From this point on, the federal government had little restraint on any authority it wished to impose on the people. Having to win elections is their only restraint and when stealing your liberty for “the greater good,” an uneducated public can be easily deceived. The original intent of the Commerce Clause to ‘regulate’ (keep regular) commerce between the states has been perverted to allow Congress to control production and sale of goods anywhere. The Constitution was thus changed from a document intended to protect individual rights to one that protected the greater good; subjugation of the individual to the Collective. Sound familiar? It should. It was Karl Marx’ philosophy. And thereby, Congress has the arrogance to tell you which light bulb you may use with little fear that the Supreme Court will intervene. Instead of tension between the branches, we have collusion among them.