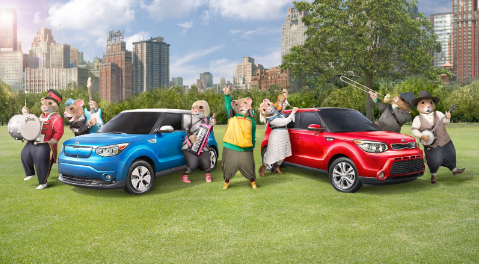 Beginning in movie theaters this weekend, some of the nation’s most recognizable advertising icons – Kia Motors’ music-loving hamsters – are back in a new campaign for the fun and funky Soul urban passenger vehicle with an upbeat message and a catchy new tune that transforms the classic “Dueling Banjos” (EMI Entertainment World) into an internationally-inspired  anthem.

Set to appear on more than 34,000 screens nationwide in National CineMedia’s FirstLook pre-show program beginning tomorrow, the 60-second “Soul Jam” spot opens on an idyllic park setting with Nathaniel Rateliff, front man of roots sensation,Nathaniel Rateliff & the Night Sweats, trading guitar licks with a banjo-playing hamster who arrives on the scene in a Soul. As additional hamsters join the fray, what begins as a friendly game of musical one-upmanship morphs into a world music inspired jam session and dance party as nearby city-dwellers join in with instruments of their own, ranging from a sitar and African and Korean Drums to a ukulele, bagpipes, violins and  more.

“The hamsters have always been plugged-in to what is going on in the world around us, and in the ‘The World Needs More Soul’ campaign they are back to share their infectious spirit of optimism and celebrate things that bring people together like music and dance,” said Michael Sprague, chief operating officer and EVP, Kia Motors America. “With each Soul execution we strive to bring a fresh musical perspective, and ‘Soul Jam’ blends a variety of styles and cultures with a highly recognizable piece of music to create something fun and different that stands out from the crowd, just like the  Soul.”

Created by David&Goliath, Kia’s advertising agency of record, the “The World Needs More Soul” campaign includes an extended cut of “Soul Jam” on YouTube.com/Kia as well as broadcast, social media, digital and out-of-home elements. In addition, the“Soul Sessions” online video takes viewers inside the recording studio for an exclusive look at the collaborative and creative process behind the creation of the “Soul Jam” soundtrack with Nathaniel Rateliff and music producer duo  BUNT.

“Music is the one true universal language. It transcends borders and boundaries, connecting people on an emotional level because it’s something we can all understand, feel and appreciate,” said Colin Jeffery, chief creative officer, David&Goliath. “In this case, the hamsters use the power of music to unite people from around the  world.”

A pop-culture phenomenon since bursting onto the scene in 2010, Kia’s hip posse of hamsters have always stood out from the crowd and brought people together through music, dance and positivity. Previously, the hamsters utilized popular songs ranging from the Black Sheep’s classic hip-hop track “The Choice Is Yours” and LMFAO’s smash hit “Party Rock Anthem” to Maroon 5’s “Animal” and Lady Gaga’s “Applause,” to spread the word that the Kia Soul offers “a new way to roll”.  In the process the hamsters have become advertising icons with the 2011 spot generating more 20 million online views. The hamsters were also recognized by the Madison Avenue Advertising Walk of Fame and named the first-ever “Rookie of the Year” after being chosen the “Automotive Ad of the Year” for two straight years by Nielsen  Automotive.

Soul sales have increased every year since hitting the market in 2009, and the extremely popular urban passenger vehicle ups its “wow” factor for the 2016 model year with a host of new style and convenience features.  Owners can express their unique individualism through a new Designer Collection that plays up the Soul’s fun-loving attitude with a two-tone paint  scheme.

Three unique trim levels (Base, Plus, and Exclaim) remain, and each one adds new features for the 2016 model year. Alloy wheels now come standard across all models.  Meanwhile, Base models equipped with the Convenience Package add a 4.3-inch color touchscreen, SiriusXM®1 satellite radio, and integrated Rear Camera  Display2.

The new Designer Collection package, inspired by its all-electric sibling, the Soul EV, brings new style with two visually striking two-toned color combinations: white with a red roof, or red with a black roof. In addition, the Designer Collection also adds 18-inch alloy wheels with black spokes and a leather-wrapped steering wheel and gearshift knob.  The Exclaim now comes standard with leather-trimmed seats. Also new to Exclaim is the Premium Package, which elevates the driving experience with desirable convenience features including Forward Collision Warning System (FCWS)2 and Lane Departure Warning System (LDWS)2, both of which are new to the  Soul.

Kia Motors America (KMA) is the marketing and distribution arm of Kia Motors Corporation based in Seoul, South Korea.  KMA proudly serves as the “Official Automotive Partner” of the NBA and LPGA and set an all-time annual sales record in 2015, surpassing the 600,000 unit mark for the first time in company history. KMA offers a complete line of vehicles, including the rear-drive K900** flagship sedan, Cadenza premium sedan, Sorento CUV, Soul urban passenger vehicle, Soul Electric Vehicle***, Sportage compact CUV, Optima midsize sedan, Optima Hybrid, the Forte compact sedan, Forte5 and Forte Koup, Rio and Rio 5-door subcompacts and the Sedona minivan, through a network of more than 765 dealers across the United States.  Kia’s U.S. manufacturing plant in West Point, Georgia, builds the Optima* and Sorento* and is responsible for the creation of more than 15,000 plant and supplier jobs.  Information about KMA and its full vehicle line-up is available at www.kia.com. For media information, including photography, visit www.kiamedia.com.  To receive custom email notifications for press releases the moment they are published, subscribe at  www.kiamedia.com/us/en/newsalert.

* The Sorento and Optima GDI (EX, SX & Limited and certain LX Trims only) are assembled in the United States from U.S. and globally sourced  parts