Death rates from unintentional injuries among children and adolescents from birth to age 19 declined by nearly 30 percent from 2000 to 2009, according to a new Vital Signs report from the Centers for Disease Control and Prevention.

However, more than 9,000 children lost their lives as a result of unintentional injury in the United States in 2009. And although rates for most causes of child injuries have been dropping, suffocation rates are on the rise, with a 54 percent increase in reported suffocation among infants less than 1 year old, the report says.  Poisoning death rates also increased, with a 91 percent increase among teens aged 15-19, largely due to prescription drug overdose, it said. 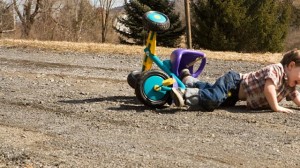 “Kids are safer from injuries today than ever before. In fact, the decrease in injury death rates in the past decade has resulted in more than 11,000 children’s lives being saved,” said CDC Director Thomas Frieden, M.D., M.P.H. “But we can do more. It’s tragic and unacceptable when we lose even one child to an avoidable injury.”

Death rates from motor vehicle crashes dropped by 41 percent from 2000-2009. Several factors have played a role in this reduction, including improvements in child safety and booster seat use and use of graduated drivers licensing systems for teen drivers. However, crashes remain the leading cause of unintentional injury death for children.

Poisoning deaths have been steadily increasing among 15- to 19 year-olds, largely due to prescription drug overdoses. According to other CDC research, appropriate prescribing, proper storage and disposal, discouraging medication sharing, and state-based prescription drug monitoring programs could reduce these deaths. The increase in suffocation deaths among infants could be curbed by following the American Academy of Pediatrics’ recommendations for safe infant sleeping environments. These recommendations state that infants should sleep in safe cribs, alone, on their backs, with no loose bedding or soft toys.

“Every 4 seconds, a child is treated for an injury in the emergency department, and every hour, a child dies as a result of an injury,” said Linda C. Degutis, Dr.P.H., M.S.N., director of CDC′s National Center for Injury Prevention and Control. “Child injury remains a serious problem in which everyone –including parents, state health officials, health care providers, government and community groups – has a critical role to play to protect and save the lives of our young people.”