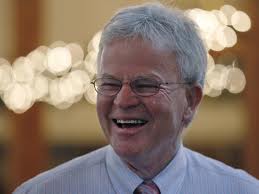 On paper Buddy Buddy Roemer appears to be a solid presidential candidate. He is the only candidate among the Republicans who has experience as both a member of Congress and as a governor.  Furthermore, he proved to have electoral success by running as both a Democrat and as a Republican.  He is well educated, with both undergraduate and graduate degrees from Harvard University.  Yet, there is something odd about him.

Maybe it is because of his electoral history.  Although he won his fair share of races, the most memorable one he was in was the race for governor in 1991 in which he ran against former KKK member David Duke, future prison inmate Edwin Edwards, and eighth district Congresssman, Clyde Holloway.  Unfortunately for Roemer, he came in 3rd, with the winners being Duke and Edwards. The runoff ended up being between Edwards, who always had very questionable ethics and was fun to watch; and Duke, who was a remarkably “normal” looking extremist (as the media depicted him). Not making this cut reflected poorly on Roemer indeed who was seeking reelection at the time.

However, Roemer’s story is still impressive nonetheless. As pointed out by his campaign, “Governor Roemer served four terms in the United States Congress from 1981 – 1988 as a conservative Democrat who often broke ranks with his party to vote with President Reagan, and was Louisiana Governor from 1988-1992 as both a Democrat and Republican. During his tenure in the Governor’s office, unemployment in the state dropped by approximately half, the state budget was balanced all years despite inheriting a huge deficit, teacher pay was linked to performance, education accountability standards were enacted, government unions were challenged, and sweeping campaign finance reform legislation was passed. Since leaving public office, Governor Roemer has been involved in a number of business ventures. Most recently, he served as the founder, CEO, and President of Business First Bank, a small business community bank with approximately $650 million in assets that took no bailout money from the federal government.”

In spite of his accomplishments, Roemer is hard to find on the political radar screen. He is not invited to any of the debates, though he has a more significant resume, politically, than many of the other Republican candidates.  Herman Cain, for example, has never held an elected office at all.  Therefore, why he is being completely ignored is interesting.  Could it be because he spent most of his career as a Democrat?  Could it be that he last served in office almost two decades ago? It is hard to say.  Others argue it is due to his disdain for big dollar donors.  He has put a limit of $100 on his contributions and argues that his GOP opponents, and Barack Obama, are more interested in the interests of the mega corporations than the people they are elected to represent.  This would obviously make him a dangerous part of the political dialogue to the establishment.  Tonight he will be on my program, the Price of Business, to discuss the cold shoulder he is receiving from the GOP establishment and more. Tune in at 8 PM CST.

He is not like the other Republicans in other respects.  Although he clearly agrees with the Tea Party and has expressed his sympathies for it, he has also stated that he has supported the Occupy Wall Street movement, according to numerous “tweets” on his Twitter account.  He believes that if massive welfare is wrong for the poor, it is wrong for everyone, especially the largest corporations that have enjoyed “bailouts” in particular.

It is difficult to imagine his candidacy “catching on,” in light of the way he is being completely ignored by the Republican establishment. Some think he is only trying to educate voters and has no real hope of getting elected.  But his supporters are passionate and they believe if he is given a fair hearing, he will certainly catch on.  Tonight, we will discuss how he will attempt to achieve that, his strategy going forward, and more.