Global music internet sensation The Piano Guys, announce the release of their new album Uncharted (Portrait). Available for preorder now, Uncharted comes out October 28 and includes their brand new song “Okay.” Written by hit-makers Andy Grammer and Dave Bassett, the upbeat track features TPG’s own Al van der Beek on vocals.  The music video for “Okay” just made its premiere on YouTube – check it out here.  The audio track is also available now via alldownload and streaming  services. 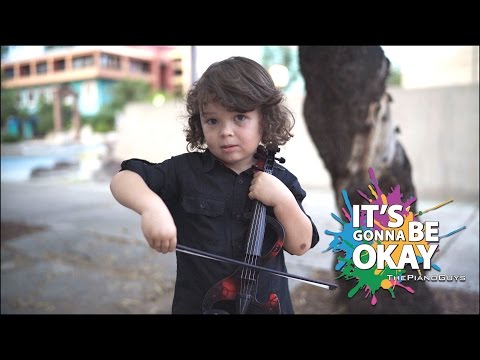 “We wanted to try something different for our new song, ‘Okay,” says Steven Sharp Nelson. “We sidestepped our standard classically-influenced instrumental niche and did something more pop-driven featuring Al’s superb vocal talent! We felt as though this was the best way to spread the positive message behind this song. We hope our fans love  it.”

For the “Okay” music video, The Piano Guys wanted to pay tribute to their loyal fans who have joined them on this exciting journey. The video opens with TPG recording the new song in the studio, where they create all of their inspirational music.  Next, we find them performing live at the USANA Amphitheatre in front of a cheering crowd of 20,000 in their home state of Utah.  The result is a sense of palpable excitement and the expression of infectious energy exchanged between the band and their passionate  fans.

The new album Uncharted features all of The Piano Guys’ recent hits including “Fight Song/Amazing Grace,” “A Sky Full of Stars,” “Hello/Lacrimosa,” and “Jungle Book/Sarabande,” all available for the first time on  CD.

The Deluxe Edition includes a DVD featuring all of their recent hit music videos including “Fight Song/Amazing Grace” (filmed inScotland), “Jungle Book/Sarabande” (shot in Chichén Itzá, Mexico), “I Want You Back,” and “Indiana Jones and the Arabian Nights” (filmed in Petra,  Jordan).

The Piano Guys – Steven Sharp Nelson, Jon Schmidt, Al Van der Beek and Paul Anderson – became an online sensation by way of their immensely successful series of strikingly original self-made music videos, which recently surpassed 1 billion views and garnered over 5 million subscribers on YouTube. They’ve made over 50 music videos since 2011, including their breakout hit, an innovative multi-handed version of One Direction’s “What Makes You Beautiful” and a gorgeous reinvention of the hit song “Let It Go” from Disney’s Frozen. To date, the Utah-based classical-pop group has released five major label albums on Portrait/Sony Music Masterworks: Wonders, The Piano Guys, The Piano Guys 2, a holiday album called A Family Christmas, and most recentlyThe Piano Guys – Live!  featuring live music from their sold out Red Rocks and Carnegie Hall concerts. Their latest albumUncharted comes out October  28.